Forging transatlantic ties to deliver real economic benefits to Northwest Ireland will be the focus of the ninth annual Golden Bridges conference in Boston on 17 November. 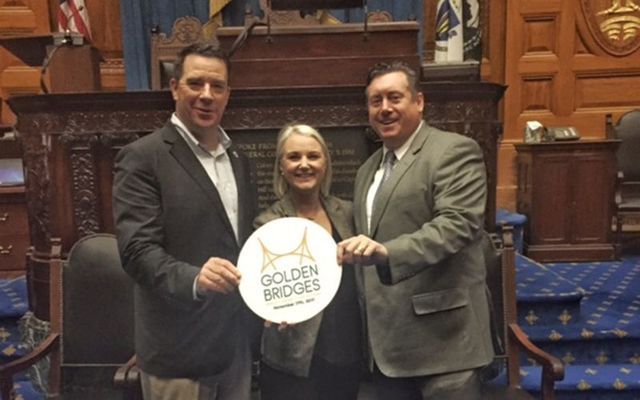 Forging transatlantic ties to deliver real economic benefits to Northwest Ireland will be the focus of the ninth annual Golden Bridges conference in Boston on 17 November.

A high-powered delegation from Derry and Donegal will showcase the very best of the Northwest to an audience of influential Irish American business and political leaders keen to learn more about the region’s offering.  The conference and luncheon will be addressed by Brendan Griffin, TD, Minister for Transport, Tourism and Sport and Joe McHugh TD, Minister of State at the Department of Culture with responsibility for Gaeilge, Gaeltacht and the Islands

“Through the Golden Bridges conference, we’ve come to know more about the exceptional companies and individuals who are flying the flag for Northwest Ireland,” says Boston-based Golden Bridges moderator Sean P. Moynihan. “In particular, we’ve been thrilled to follow the upward trajectory of the Northwest Science Park and the success of companies like Bemis, Pramerica, Randox and Seagate. Now, we’re keen to hear more about plans to create a medical school at the Magee Campus of the University of Ulster and be brought up to date with the 2023 European City of Culture bid. Derry and Donegal have firm friends in Boston and Massachusetts and our intention is to ensure that relationship is strengthened and enhanced at the Golden Bridges gathering.”

Heading the delegation from the Northwest will be Mayor Maolíosa McHugh of Derry City and Strabane District Council and Cllr Gerry McMonagle, Mayor of Donegal. Also taking part in the conference will be representatives of Ulster University, Údarás na Gaeltachta, Tourism Ireland and Invest Northern Ireland.

For full agenda and to register, go to www.aisling-events.com.