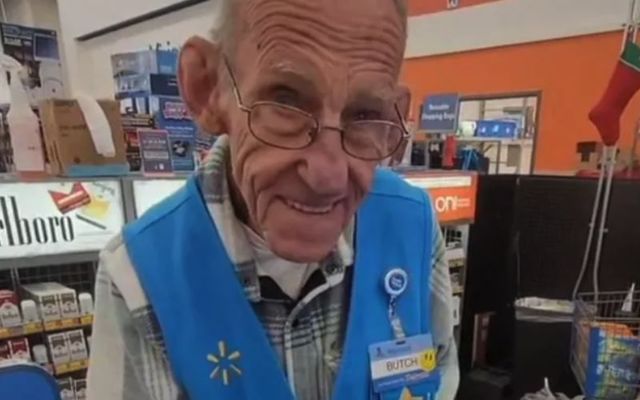 Warren "Butch" Marion plans to leave his Walmart job and travel to Florida to spend time with his daughters thanks to Rory McCarty's GoFundMe. GoFundMe

Rory McCarty has launched a GoFundMe in aid of 82-year-old Warren "Butch" Marion, a ten-year veteran of the US Navy who has worked since he was 11 years old and is still working eight to nine-hour shifts at Walmart.

McCarty, inspired by other crowdfunding videos on TikTok in aid of elderly people who are forced to continue working due to financial difficulties, posted a TikTok on his "Bug Boys" account explaining to his friend Butch how it would work.

In the caption, McCarty wrote: "82-year-old Butch still putting in work. Has anybody seen the videos where a guy raised 180k to help an 82-year-old Walmart employee retire. We ought to do that for Butch. Who would donate?"

@bug_boys 82yr old Butch still putting in work. Has anybody seen the videos where a guy raised 180g's to help an 82 yr old walmart employee retire. We ought to do that for Butch. Who would donate? #fyp #foryou #foryoupage #walmart #gofundme ♬ original sound - BugBoys

The good samaritan went on to set up a GoFundMe page for Butch, which at the time of publication had raised more than $81k for the US Navy vet.

McCarty wrote on the GoFundMe that he was "astounded" to see Butch, an "older man," still "grinding" and working 8-9 hour shifts.

He continued: "I wanted to help this Navy Veteran to live the remainder of his years traveling to see his kids in Florida. Get him off his feet for 8 hrs at a time. And do the things he would love to do that he may not be able to for financial reasons.

"Every penny will go to Butch.

"I will be hand delivering Warren Marion (Butch) a cashier check for the full amount given after the Gofundme fee is subtracted."

McCarty has since shared the good news with Butch. Illustrating just what type of employee and man he is, Butch plans to give his two weeks notice to Walmart and travel to Florida to spend time with his children.