The monument in Scituate, Mass., was installed in 2020, but an official dedication could not take place until now because of pandemic restrictions. 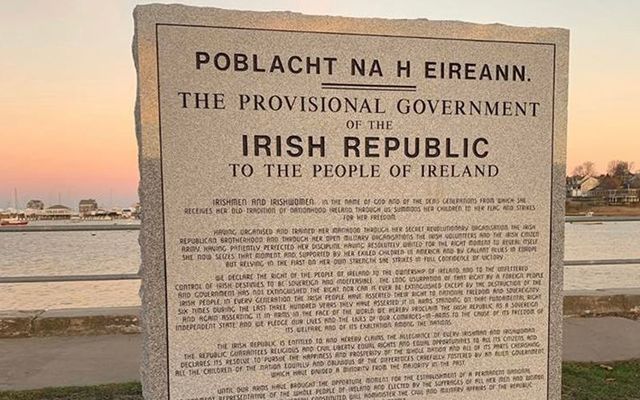 After a two year delay due to the COVID pandemic, the official dedication of the Easter Rising monument in Scituate, Massachusetts, will take place on Sunday, April 24.

The monument at Scituate Harbor will be dedicated on the 106th anniversary of the start of the Easter Rising.

Although the monument was installed in 2020, an official dedication could not take place until now because of pandemic restrictions.

The ceremony is scheduled for noon at the Easter Rising monument beside the Morrill Memorial Bandstand at Cole Parkway.

According to the Patriot Ledger, dignitaries expected to attend the event include Irish Consul General Laoise Moore; Daniel O’Connell, national president of the Ancient Order of Hibernians; and state and local officials.

Rev. Kenneth Cannon will bless the monument and soloist Ma’Iri’N’ U’ Che’ide will sing the national anthems of Ireland and the United States.

Join the Father John Murphy Division and the Town of Scituate in dedicating the Easter Rising Monument this Sunday. April 24th at noon. #WhatsAHibernian

“This is a day that many have been waiting for for a long time,” said John Sullivan, a Scituate resident and member of the Easter Rising Monument Committee.

The granite monument  is a tribute to the 1916 Easter Rising, which began on Easter Monday, April 24, 1916 in Dublin, Ireland. The rebellion for Irish independence ignited a series of events that changed the course of Irish history,  leading to the creation of the Irish Free State and eventually the Irish Republic.

Inscribed on the monument are the words of the 1916 Proclamation of the Irish Republic, which was read by Padraig Pearse outside the GPO on what is now O'Connell Street, marking the beginning of the Rising.

The monument was paid for entirely by private donors, with time and labor contributed by local residents. According to Sullivan, the monument is a tribute to the Irish heritage of Scituate and the South Shore.

“We have the only such monument in the entire United States,” he said. “It’s a great honor for our town, and to our Irish heritage.”