An Irish spokesperson in Paris said “we are all part of a wide interconnected transnational Irish diaspora strongly linked to Ireland. What happens on the streets of Dublin can have a rippling effect in Irish communities abroad.” 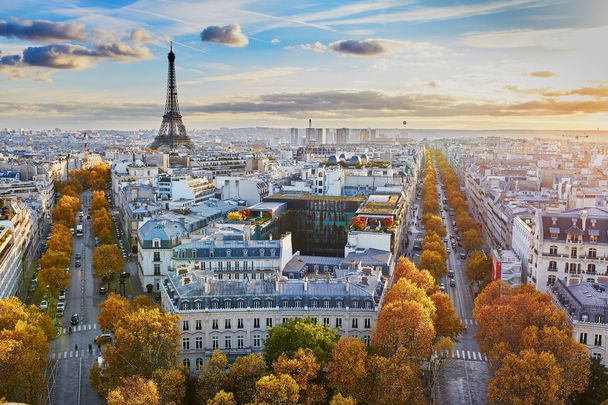 An Irish spokesperson in Paris said “we are all part of a wide interconnected transnational Irish diaspora strongly linked to Ireland. What happens on the streets of Dublin can have a rippling effect in Irish communities abroad.”

Strange phenomena reported at the Saint Patrick's Day Parade in Paris may have a connection with Druids, formerly “banned” by Saint Patrick, who have made a comeback and are defiantly dancing on the streets of Dublin!

A druid, dressed as ‘Saint Patrick’, may have infiltrated the second St. Patrick's Day Parade in Paris. A French bystander said that a ‘Druid like Saint Patrick’ stuck out and instead of marching like everyone else sporadically broke into a strange, archaic dance.

Thousands of Irish, and people that know on March 17 'you don't have to be Irish to be Irish,' marched in this year’s parade in Paris. The crowds were jovial and oblivious to the tenebrous druidic elements referred to in Niall O’Dowd’s ‘IrishCentral’ March 21 article entitled, “Leading cleric slams gay Irish leader, and says Irish church scandals “peripheral.”

In the article, O’Dowd reported that the well-known American media figure Father William Rutler, pastor of Saint Michael the Archangel Church in Manhattan, criticized Leo Varadkar, the Irish Taoiseach, (Prime Minister). He referred to “Leo Vardkar’s sexual orientation and the fact that he may well marry his partner, Matthew Barrett”.

Father Rutler (73) who since 1988 has a weekly TV programme on the conservative Catholic Eternal Word Television Network (EWTN), also stated that abortion legislation passed during Varadkar’s presidency, along with “weak church leadership” were major problems in today’s Irish Catholic church. Father Rutler also claimed that pagan Druids, outlawed since the middle of the fifth century, had been enticed back to dance on the streets of Ireland’s capital!

As the Saint Patrick’s Parisian cortege made its way through the historic streets of the Latin Quarter, two unusual complaints, that may have a connection with the mysterious Druid’s presence, were made on what was otherwise described as ‘a perfect day’.

Funnily enough, it was two members of the Bertillon family (featured in Le français d’aujourd’hui ‘Today’s French’, a French textbook formerly used in Irish schools) now living in different streets of the Latin Quarter, who complained.

Alain Bertillon had felt a strange movement in the pavement as he walked. He said it certainly wasn’t unpleasant, in fact, quite the opposite as the strange sensation happened just as he walked alongside the parade and the sun came out from behind the clouds.

However, he voiced concerns that the marching may have somehow damaged the historic streets. Paris city officials have since clarified that absolutely no damage was done, and none of the cobble or flagstones on the march’s route were in any way impacted.

Marie-Claude Bertillon, Alain’s sister, who was out walking her poodle Kiki, had also been alarmed when she turned in the opposite direction to the parade. Poor Kiki, had almost been blown away by a sudden, bizarre, gale-force headwind.

Could it have been the amount of wind the ‘Paris and District Pipe Band’ and the ‘Poil O'Brass Band’ playing in the parade had generated? Otherwise, she thought the parade was very pleasant and was very pleased to see that so many of the Irish people present, many of whom may have learned French from the textbook stories about her family, seemed to have done so well.

An Irish lady living in Paris said she was delighted that Alain and Marie-Claude, (albeit no longer children), had literally stepped out of her old school books. She hoped that next year the Bertillons would march alongside Irish people, who had been inspired by the adventures of their youth. Marie-Claude noted down the date in her Hermès agenda. A reassured Alain said he’d also be very happy to take part in the 2020 parade.

All’s well that ends well, however that still did not sort out the problem of the strange phenomena and the possibility that one of the Dublin Dancing Druids, while masquerading as Saint Patrick, had infiltrated the Paris parade. Since the parade, Irish and French scholars have pored over documents. Unfortunately, up till now, they haven’t been able to link the strange change in wind speed and direction, and the moving pavement with any literature on the subject of Irish Druids or old Irish religions.

Although many bystanders spotted the ‘Druid like Saint Patrick’ at the parade, police have still not been able to identify him. He has not been sighted in Paris since; airport authorities have been alerted and are on the lookout.

Irish publicans said that if the Druid and his Dublin based colleagues were exonerated, they might be interested in offering them job opportunities in Irish Parisian pubs. However, they would like to see for themselves the druidic dance performance Father Rutler referred to before making any firm propositions. They also wanted to be very clear that the Druids, apart from doing their dance, might also be required, to roll up their flowing sleeves and pull a few pints.

After a further week of intense research, academics said that for them the strange phenomena might be explained by the following words many Irish Mammy’s recited to their children before they left Ireland. The blessing, along with wishing them well, also seemed to impact road structure and wind direction. However, they pointed out that their research was in no way conclusive and they encouraged investigating parties to also reach out to the French scientific academia:

"May the road rise up to meet you.
May the wind be always at your back.
May the sun shine warm upon your face;
the rains fall soft upon your fields
and until we meet again,
may God hold you in the palm of His hand"

Had the St. Patrick’s Day revelers really been blessed? Many felt so and if God is holding us all in the palm of his hand, we hope he is paying particular attention to Varadkar who hasn’t missed a beat, and who is under the pressure of not being able to miss even a fraction of one, until the malingering Brexit parade is part of history. We also have to hope that the reappearance of the Dancing Druids foretells future festivities and is not some sort of Shakespearian omen of forthcoming tragedy. After talks in Brussels on 21 March, Chancellor Merkel told journalists, “if there is a no-deal Brexit there would have to be a hard Border in Ireland”.

As the British army readies 3,500 troops and sets up an underground bunker to prepare for the possibility of a no-deal exit, it seems the vast majority of Irish men and women, at home and abroad, irrespective of political or religious affiliations, wish that ‘the road may rise up to meet’ Varadkar as he marches forward, using his intellect and political skills to negotiate Ireland through the Brexit quagmire.

As well as venting against Varadkar and worrying about dancing druids, Father Rutler also expressed his disarray about this year’s St. Patrick’s parade in New York, stating it had ‘become a bibulous charade of Saint Patrick’ with New Yorkers that ‘masqueraded as leprechauns and drank green beer’. But who actually knows what Saint Patrick felt if he was looking down ‘from the mansions above’ on 17 March? Perhaps he was delighted that shamrock was flown in and blessed and that he was celebrated in parades all over the world. Contrary to Father Rutler he might not feel that Irish Catholic Church scandals are “peripheral” problems. Perhaps he empathizes with and ‘bestows his sweet’ and hopefully healing smile on the victims.

However, going back to the Defiant Dublin Street Dancing Druids, apart from Irish Publicans in Paris, a wide spectrum of the Parisian community, from the intelligentsia to burlesque cabarets managers, have expressed interest in welcoming the formerly “banned” Druids, and any information on their whereabouts would be greatly appreciated!

It’s now only 357 days to St. Patrick's Day 2020 wherein the City of Light, we’ll again ‘hail our glorious St. Patrick’, and also raise our glasses to the Taoiseach, Leo Varadkar.

Until then, go n-éirí an bóthar libh!