The California Contractors State License Board found that Segue Construction willfully neglected to uphold regulations in the balcony construction, leading to its collapse. 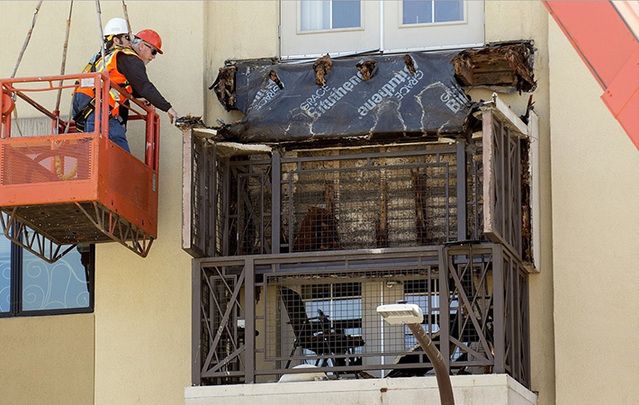 An examination of the Berkeley balcony days after the collapse. Twitter

The construction company responsible for the balcony that collapsed from a Berkeley apartment in June 2015 killing six Irish students and injuring seven others has lost its license almost two years after the tragic accident.

Although no formal charges were brought against Segue Construction, the general contractors on the Library Gardens apartment complex in Berkeley, California, it was found that the company's neglect to properly waterproof the materials used to construct the balcony led to dry-rot which weakened its structure.

The company has now had its license revoked having been accused of “wilfully disregarding” the building plans and "willfully departing from trade standards" in the construction of the apartments.

On June 16, 2015, Ireland and the Irish-American community were struck by tragedy as six young students lost their lives in the balcony collapse.

Last Friday, the California Contractors State License Board announced an agreement had been reached with Segue Construction to revoke their license and the company is barred from reapplying for another license for the next five years.

While the company is not contesting the decision, they also acknowledge the accusation "involves disputed questions of fact and law".

Holding a contractor’s license in California since March 1992, Segue Construction entered a contract regarding the Library Garden complex in January 2005, completing the work by April 2007.

By not including pressure treated joints, using a flooring substance previously deemed unacceptable, and by failing to provide the balcony with adequate waterproofing, the company left the balcony structurally weaker than outlined in the building’s requirements and opened it up to further structural weather damage.

The settlement report deemed that if these requirements had been met, the balcony would have been able to withstand the weight of the students on the night of June 16, 2015.

Before Segue Constructions can ever apply for a further license, the settlement agreed that the company's CEO and Responsible Managing Officer (RMO) at the time of construction Kirk Alan Wallis must pay the Board $99,950 in investigative costs while the company's Officer and RMO at the time of the tragedy, David Michael Dunlop, must also reimburse the Board for investigative costs of up to $15,000.

Following the accident and the revelation that dry-rot was the main cause of the balcony collapse, it also emerged that Segue Construction had faced previous convictions for poor workmanship which under the State of California law they were not required to disclose when undertaking a new job.

The victims’ and survivors’ families last year set about trying to change this law in the hopes of improving the construction standards in the state in the future, spearheaded by Jackie Donohue who lost bother her daughter Ashley and niece Olivia in the accident.

With thanks to the work of the families and the testimony of critically injured victim Aoife Beary, the state of California implemented legislation late last year that requires contractors to disclose to their regulator any convictions they’ve faced for poor workmanship and will also require state studies on the need to ensure balconies are safer in the future.