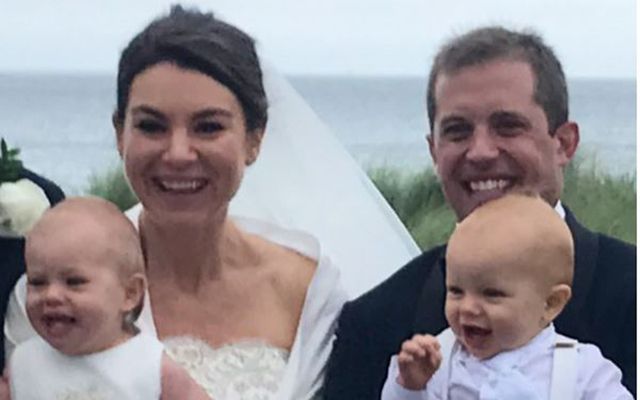 Guests at the wedding are rumored to have included Rory Kennedy, Robert F. Kennedy Jr. and his wife, actress Cheryl Hines, with the bride and groom both taking to Instagram with beautiful photos to announce the occasion, Townsend simply writing “Married.”

A post shared by Meaghan Kennedy Townsend (@meaghankennedytownsend) on Jul 31, 2017 at 6:19am PDT

Townsend confirmed the marriage with an adorable post of the happy couple accompanied by their twins decked out in a cute white dress and suit to match their parents. Birdzell also posted a picture of the couple as they walked back down the aisle after the nuptials.

According to his website, Birdzell, a New York State native, joined the Marine Corps where he served as an infantry officer after achieving a BA in Economics at Emory University. He was a founding member of Marine Corps Special Operations, serving overseas in Iraq, Mali, and Kenya. He earned an MBA from the University of Virginia and attended Georgetown Security Studies Program after eight years in the MCSB before working as assistant director of corporate and foundation relations at the NRA.

Birdzell now divides his working time “between advising new companies on how to build their brand and hosting a range of programming which includes Brother on SnapChat, GunTV, RecoilTV and YouTube.”

The yoga instructor and former marine married almost exactly a year after welcoming David and Arabella. The couple apparently met while Townsend was teaching a yoga class.

The Kennedy family were out in force for the celebration of Bobby and Ethel Kennedy’s granddaughter, sharing photos online of pre-wedding brunches and yoga sessions from their Cape Cod summer home.