A host of prominent human rights lawyers and activists will address the Legal Symposium at the Belfast International. 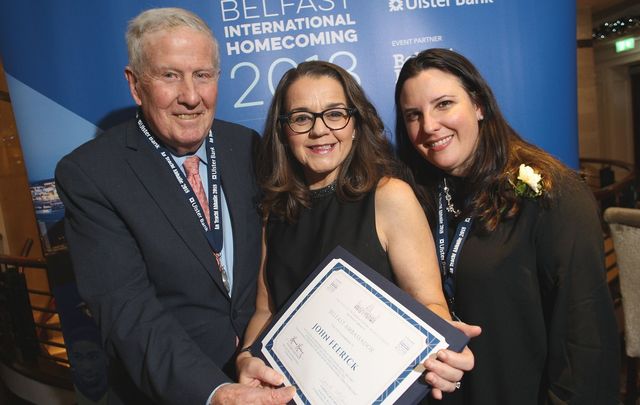 A host of prominent human rights lawyers and activists will address the Legal Symposium at the Belfast International Homecoming which will take place in the city between 16 and 18 October.

International lawyers and local leading lights will join delegates at the Law Society on Thursday 17 October to debate a range of crucial and timely rights-based issues at the Belfast International Homecoming this October.

Freedom of speech and press freedom; human rights in the Supreme and European courts; the legacy issue from a gender perspective; and voting rights for Irish citizens abroad, will be just some of the topics discussed at the event which has established itself as a key date in the north’s legal calendar.

Read more: Heft of the Diaspora brought to bear on Brexit challenges

Discussions will be led by an elite of outstanding advocates and activists on both sides of the Atlantic including the Chair of the Bar of Northern Ireland’s Professional Conduct Committee, Fiona Doherty QC; Deputy Director of Relatives for Justice, Andree Murphy; a former judge of the Superior Court of the State of New Jersey, Francine Schott (retd.) and President of the Brehon Law Society of New York, Jennifer Frankola.

Gemma McKeown from the Committee on the Administration of Justice will join Fiona Doherty QC in delivering a presentation of their work on the Pat Finucane case entitled, ‘Human Rights in the Judicial Review Court and the European Court of Human Rights: A study of the Finucane case in the Supreme Court and Strasbourg’.

The murdered human rights lawyer’s son, John Finucane – himself a leading lawyer and currently Mayor of Belfast – will introduce the day’s proceedings along with the President of the Law Society, Suzanne Rice, and symposium convenor, Niall Murphy, a Partner with KRW Law.

Mr Murphy, who this year represented one of two journalists arrested by the PSNI in relation to their documentary ‘No Stone Unturned’ about the massacre of six Catholics in 1994, said the scope of this year’s topics reflected the broad assaults on freedoms and rights taking place across the globe.

“In the growing likelihood of a no-deal Brexit, we will discuss the importance of the European courts in addressing appalling human rights abuses such as the murder of Pat Finucane in 1989,” said Niall.

“One of Ireland’s leading human rights activists, Andree Murphy will examine gender perspectives on legacy, an issue which, overall, continues to be thwarted by political interference.

“We will also be joined by President of the Brehon Law Society of New York, Jennifer Frankola who will discuss ‘Fake News, Press Freedom and the First Amendment’.

“As journalists across the globe are increasingly facing threats, harassment, and intimidation, it is incumbent on governments and the international community to protect them, to create the conditions they need to do their essential work, and to investigate and prosecute perpetrators of attacks on them.”

A particularly relevant question to individual members of the diaspora will also be discussed in barrister Mark Bassett’s presentation ‘The Mary McAleese Question: Should all Irish citizens vote for the President?'. This discussion comes just days ahead of a referendum in the Republic of Ireland to extend presidential voting rights to Irish citizens living outside the State.

Register for the Legal Symposium at the Belfast International Homecoming at BelfastHomecoming.com/legal-symposium.