Iconic Irish record label Claddagh Records, which played a critical role in the revival of Irish music and poetry during the 20th century, will remaster and digitize its archive as part of the deal. 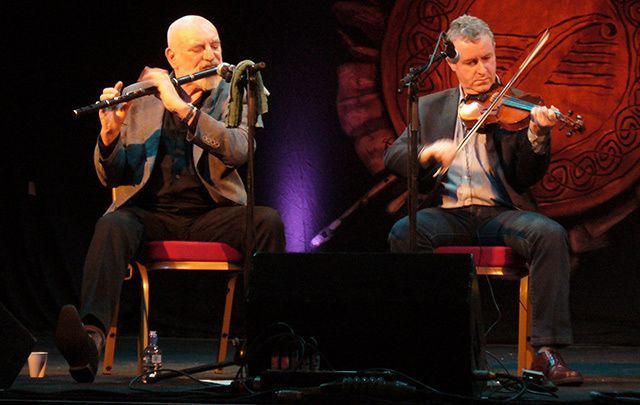 Matt Molloy and John Carty of the Chieftains, one of the most famous bands associated with Claddagh Records. Matt Molloy Flickr

The iconic Irish music label Claddagh Records has been relaunched along with a new webstore after signing a worldwide licensing agreement with Universal Music.

Formed by Garech and Ivor Browne in 1959, Claddagh Records played a critical role in the revival of Irish music and poetry in the 20th century and brought traditional Irish music to an international audience.

The record label licensed its back catalog to Universal Music Group in August last year and was relaunched under the Universal umbrella earlier this week.

It will now embark on an ambitious remastering and digitizing of the Claddagh Records archive, which amounts to more than 60 boxes of material stored in a Bank of Ireland vault for decades.

More than 60 Claddagh recordings are expected to be made available for the first time later this year, including The Chieftains 1-10, Leo Rowsome’s King of the Pipers, and Derek Bell’s Carolan’s Favourite.

Six further archive recordings - including Seamus Heaney and Liam O'Flynn's the Poet and the Piper - will be remastered and pressed on vinyl for the first time. The recordings are expected to be released later this year.

As many as 300 recordings from artists like the Chieftains and poets like Seamus Heaney and Patrick Kavanagh will be remastered and digitized as part of the move to Universal Music. The recordings will subsequently be released nationally and internationally to ensure that their legacy lives on.

Universal Music will be releasing a Chieftains 60th Anniversary album in 2022 as part of the deal.

Claddagh Records is one of Ireland's oldest record labels and was instrumental in showcasing the work of some of Ireland's most celebrated poets and artists. Its first release was Leo Rowsome's King of the Pipers, which was followed by recordings from the Chieftains and Liam O'Flynn.

Explaining the decision to sign with Universal in August 2020, Claddagh Records chairman James Morrissey said that the deal made Claddagh recordings accessible to national and international audiences.

"Garech Browne’s lifelong wish was for Claddagh recordings to be accessible nationally and internationally to those interested in Ireland’s cultural history," Morrissey told the Irish Times in August.