A member of murdered Clodagh Hawe’s family believes she and her three young sons can now “finally rest in peace.” 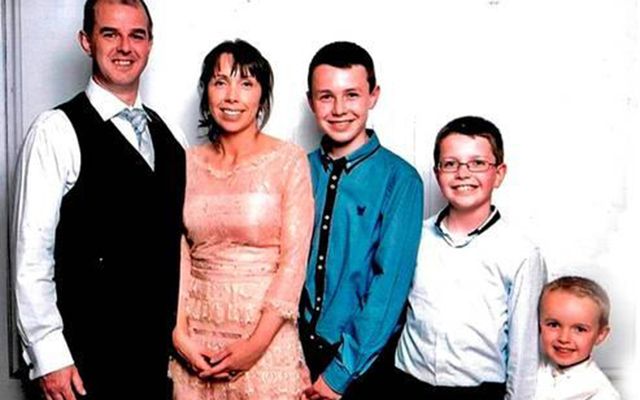 The body of Alan Hawe, who killed his wife and three children before killing himself in August 2016, has been exhumed from the grave he was sharing with his murdered family.

A small Co. Cavan town was shaken last years by the deaths of Clodagh Hawe and children Liam, Niall, and Ryan, late in the summer of 2016 when their bodies were discovered at their home.

Although the family was initially buried together in St Mary’s Church in the town of Castlerahan, Clodagh’s family immediately began a process of attempting to have her husband’s body reinterred away from the rest of the family.

A member of her family has now stated Clodagh and her three young sons can "finally rest in peace" after Alan's body was removed in the early hours of this morning. Positioned to the left side of the rest of his family, the removal did not disturb the other four coffins. His body must now be re-interred or cremated within 48 hours.

It is believed that permission was finally granted for Alan’s body to be exhumed by his next of kin in March, but weeks of wet weather delayed the process. It had been hoped that the removal would have been completed before Clodagh’s 40th birthday on Easter Sunday.

Gardaí believe Clodagh Hawe to have been stabbed by her husband before he strangled and stabbed their three young boys in their sleep. Alan Hawe, who was a vice principal at a local elementary school, then proceeded to take his own life by hanging.

A family member who visited the house on that Monday morning found a note attached to the backdoor advising any visitors to contact the Gardaí and not to enter the house themselves. Arriving at the house, Gardaí discovered the five bodies along with a possible second confession note left by Alan Hawe. The letter was sealed and addressed to family relatives.

Hawe, who taught at Castlerahan National School, an elementary school also attended by his two youngest sons Niall and Ryan, is reported to have planned the murders which occurred in the early hours of Monday morning. Gardaí immediately began to investigate the mental health of the father in the lead up to the deaths, talking to friends and family members about the lead up to the new school year which could have shown him to be under stress.

All members of the family were seen at a local GAA match on Sunday afternoon just hours before their deaths. They are said to have been active members of the Castlerahan GAA club with Alan collecting money at the gate during the Sunday match. He was also just beginning his first year as Treasurer of the club. The family was described as “salt of the earth” by neighbors.

Before her death, Clodagh Hawe (nee Coll) was also set to return to work in Oristown National School in Kells, Co. Meath, where she worked as an elementary school teacher. She was the 87th Irish woman to be killed by a current or former partner since 1996.

Since the tragedy, her family has worked to raise funds and awareness for Women’s Aid, in the hope of helping other women.

Clodagh’s sister Jacqueline Connolly told the Irish Independent: "We are in the very early stages of setting up a committee with a view to doing the Women's Mini-Marathon in June in memory of Clodagh, Liam, Niall, and Ryan. We hope to raise funds from this, with a view to setting up a refuge in Cavan.

"One woman a day from Cavan is turned away from other refugees due to lack of accommodation and facilities.”

On a fundraising Facebook page set up earlier this year, Clodagh’s family wrote:

"Clodagh was strong and beautiful inside and out and was so loving. She was warm, loving, bright and capable and she was bringing her boys Liam, Niall, and Ryan, up to have those same qualities. They will live on and her strength will live on.

"We want their deaths to help other women who are living in fear and isolation in their own homes. So please support our fundraising appeal for Women’s Aid.

"One in five women in Ireland experience domestic abuse and many women are isolated and alone.

"Women’s Aid runs the 24hr National Freephone Helpline 1800 341 900 which is a confidential service for women affected by domestic abuse.

"Their work makes a life-changing difference and we hope the donations made in Clodagh’s name will help them be there to listen, to believe and to support women. Every single time.”

An inquest into the family’s death is believed to take place later this year.