Baby Belle, the stillborn baby discovered on Bell's Beach in Dublin last year, has been memorialized in the Angel's Plot at Glasnevin Cemetery. 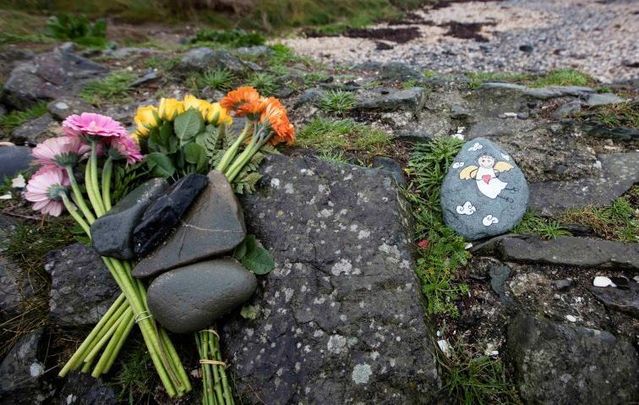 Locals had left flowers on the beach where Baby Belle was discovered in December. RollingNews.ie

‘Baby Belle,’ the stillborn baby who was discovered on a Dublin beach in December, has been memorialized on a headstone in the Angel’s Plot at Dublin’s Glasnevin Cemetery.

On December 18, 2018, a volunteer discovered the partially buried child on Bell's Beach in Balbriggan, North Dublin. The baby’s parents were never identified, despite desperate pleas for the mother to come forward in order to seek medical attention.

“Be not afraid to seek medical help” Crowds gather in a show of support to the mother of baby Belle discovered on a beach in Balbriggan, Dublin last week and urge her to come forward and get the help and medical attention she might need. pic.twitter.com/duJU9OS79C

Investigators determined that the child was stillborn, and no criminal investigation was launched.

In February, the baby girl - who was given the name Belle by local gardai - was buried in the Angel’s Plot in Glasnevin Cemetery, unbeknownst to the local community who had rallied for Belle to receive a “dignified” funeral.

At the time, Independent councilor Grainne Maguire told Dublin Live: "I am shocked and saddened to hear that baby Belle was buried in Glasnevin last Friday.”

"We as a community came together to show unity and support to her and her family and while I appreciate that there are things that are out of our control for various reasons that little baby had a name and a community that cared.”

"She deserved to be buried in a dignified manner. Both Fingal County Council and A Little Lifetime Foundation had offered support to give her this dignified burial.”

"It didn't have to be a public affair it could have happened in private through the foundation under the guidance of those who understand."

On Mother’s Day, locals held a small service for Belle at the communal plot, bringing flowers and teddy bears to the child's grave.

Now, The Irish Sun reports that the communal plot in which Belle is buried has a headstone that bears her name and the inscription “Pray for our Angels.”

Barbara McMahon, a local woman who participated in a vigil for Belle earlier this year, told The Irish Sun: “It is comforting to know that she’s being recognized, that people will know she existed and that she’ll never be forgotten”.

Bob McKenzie, another local, said: “It’s only fitting that her name should be on the headstone. Her story was tragic but she captured the hearts of the people of Balbriggan.”

“The way the town reacted to the news was with respect and love. The candlelit vigil was something very special and the people of this town will never forget Belle and now they can go to her place of rest."