Artist adds color to historic photos of the Titanic 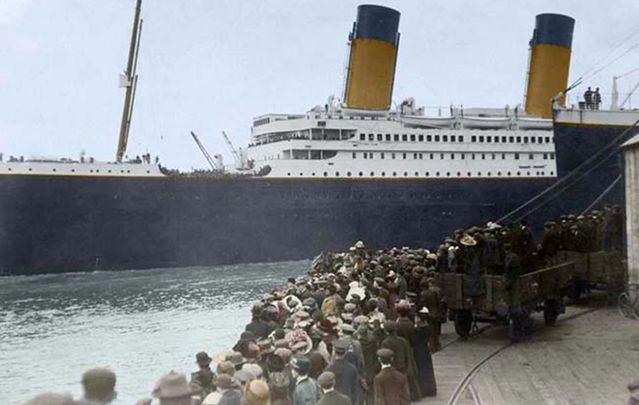 For a closer to life view of the Titanic tragedy, take a look at the works of Russian photo editor Anton Logvynenko, who added color to original black and white photos of the ship. He initially started the painstaking process to commemorate the 100th anniversary of its sinking in 2012.

Logvynenko’s colored photos show the Titanic under construction, first class rooms onboard, and the send off for its maiden voyage.

He used current technology to add color to the original photos. According to the artist’s website, Titanic-in-color.com, “colors have been chosen on the basis of in depth research.”

The Titanic was a luxury liner and the interior of the first class rooms was decorated to keep pace with leading hotels. Logvynenko’s photos of these rooms highlight the quality of fabric used to decorate these rooms and the designers’ attention to detail.

Onboard the Titanic there also was a gym, squash court, pool, library, Turkish bath and a Parisian cafe. Longvynenko’s colored photos of these rooms bring out details that had been hidden in the original black and white versions.

On Logvynenko’s website you can browse through his colored photos and compare them with the original black and white ones. There are also photos (both colored and black and white) of Titanic’s sister ship Olympic and other liners. Logvynenko’s project is not yet complete and the website encourage visitors to return to see the latest updates.

As part of the White Star Line, the Titanic was one of the most luxurious ocean liners to have been built and was the largest steamship in the world. It was built at the Harland and Wolff shipyard in Belfast. At the time Belfast had a booming shipbuilding industry. The Titanic became famous when it struck an iceberg and sank on April 15, 1912 on its maiden voyage from Southampton, England to New York City. 1,517 people died in the tragedy.

The Titanic had been called “unsinkable” because it could stay afloat with four chambers flooded.The damage from the iceberg flooded five chambers and there were few lifeboats on board. Scholars have debated the role of Titanic’s design and construction in its sinking, but Belfast locals insist “she was fine when she left” and “that’s what happens when you give a ship to an English captain and a Scottish navigator.”