All aboard! Campaign to save “The Quiet Man” train station

The train station where John Wayne arrives in "The Quiet Man" still exists in County Galway, but it’s in need of some rescuing. 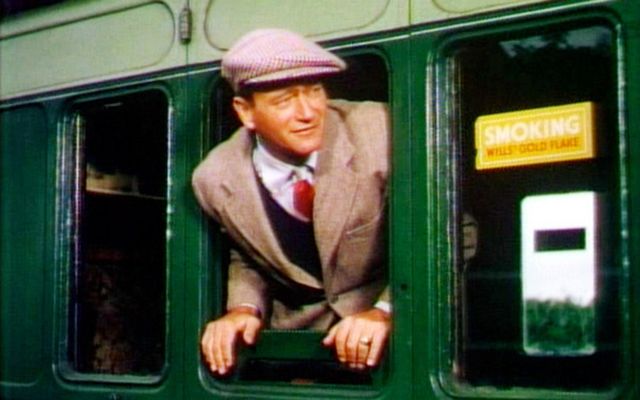 To the legions of fans of “The Quiet Man,” John Wayne will always be looking out the carriage window as the train pulls into the station.

In real life, of course, Wayne – Sean Thornton in the 1952 screen classic – has departed the stage.

But that station is still in place.

And in real life it goes by the name of Ballyglunin Railway Station.

But, as with real life, time can take its toll and Ballyglunin is showing its age.

The station, which is in County Galway, is no longer active but could be again someday if plans for bringing back mothballed rails lines in the West of Ireland eventually come to fruition.

But for now, Ballyglunin is a quiet place.

Though not a deserted one.

It draws visitors from near and far and in the case of Paschal Cassidy it was the setting for his wedding last year.

“I fell in love with the station when myself and my wife Grace got married there last September,” said Paschal.

It was the first wedding ever to take place in the station, but likely not the last.

Assuming the unfolding effort to preserve it proves to be a success.

Read More: Why do people love The Quiet Man so much?

“We both have a huge fondness for the place and became involved with the local committee to help them restore it and keep it standing,” said Paschal.

“The station has been under the care of the committee for over ten years and they have done huge work to keep the station in good condition.

“We have been fundraising for the last few years to keep the place standing and in use for the local community.

“This year, we have to replace the roof on the station as it is in a really bad state of disrepair and is in danger of collapsing.”

The committee is planning to launch a crowd-funding campaign next month, Cassidy said.

Read More: Restoration of Quiet Man cottage to begin as dispute is settled

“The station gets many visitors from far and wide every year and ‘The Quiet Man’ has a huge resonance with both Irish and foreign audiences. It would be a shame to let this piece of history fall to ruins,” he added.

The station is on the Limerick to Claremorris line and was originally opened in 1860 by the Waterford, Limerick and Western Railway.

It later became part of the Great Southern and Western Railway.

Ballyglunin was still in business 65 years ago when “The Quiet Man” was filmed, but fell victim to rail “rationalization” in the 1960s and 70s.

In more recent times, plans have been drawn up to reopen the Limerick-Claremorris line under the rather less than romantic title of the “Western Railway Corridor.”

Read More: The Quiet Man jaunting cart finds permanent home at the John Wayne Museum in the US

The crash put paid to that idea, though the plan still exists and could begin rolling at a future point when finances become available.

This story appears courtesy of the Irish Echo. For more stories, visit their website here.