A heroic team, a remarkable story: Concern needs you

What started with the Irish has now expanded to the world. 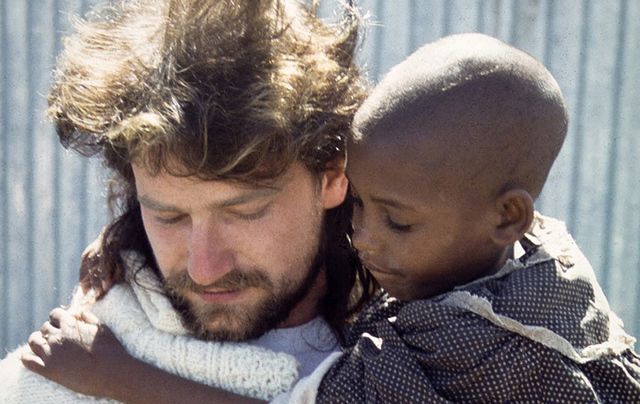 A Young Bono with a child he met on his first trip to Ethiopia in 1985. Gary Roebbelen

"It was a trip...to Ethiopia to see what Concern was doing...where I learned what it takes to really get into the trenches," says U2's Bono, no stranger to charitable involvement. The Irish native cites Concern Worldwide, a Guidestar Gold-rated international aid agency, as the charity that made him "very proud as an Irishman of what we're doing as a country."

What exactly is Ireland doing? Ireland is one of the world's most charitable countries, so it seems fitting that Concern Worldwide was founded in the homeland of Irish co-founders John and Kay O'Loughlin-Kennedy. With the help of their own staff, volunteers, and donations, Concern has made a positive mark fighting hunger and poverty in the world for almost 50 years.

In 1968, a famine ripped through the war torn Nigerian province of Biafra and missionaries called on Irish citizens to be the first responders. A group of friends raised enough money to send one ship stocked with supplies, naming their organization 'Africa Concern.' Three months later, the 600-ton Columcille arrived off the Biafra coast. By the end of 1968, Africa Concern had raised £3.5 million, the equivalent of $70 million today.

But their work was far from done. In 1970, a cyclone hit East Pakistan and Africa Concern became Concern. Since then, they expanded their reach to over 50 countries around the world. Today, Concern employs 3,200 people in 28 countries, doing everything from disaster relief, to fighting famine, to long-term development.

Bono's initial trip to Ethiopia launched a long career of charitable aid. But Bono is only one of many Irish citizens concerned about the welfare of others. Irish President Michael D. Higgins described the work of Concern as "heroic." The late poet, Seamus Heaney, said of the organization, "[by] helping Concern we can fulfill some of the great human obligations." Concern has achieved an incredible amount from their early foundations to today, reaching more than 9 million people, often in the face of danger and the most difficult conditions.

The next step for Concern was to develop a US branch. Concern Worldwide U.S. was established in 1993 in recognition of the Irish community in America, whose relatives and friends contributed so much early in Concern's history. Today, they are a renowned international organization that sends more than 90 cents of every dollar directly to some of the world's poorest countries. But the staff at Concern cannot continue to combat disaster and famine alone. Just like in 1968, there is a famine in Africa today and disaster around the world. Concern has teams on the ground in locations from Syria to Haiti and everywhere in between. What they need is us.

From its 1968 origins of friends helping friends, Concern continues its mission to help those in need, to treat all struggling citizens, whatever their race, age, or background, like friends. What started with the Irish has now expanded to the world. We need to do our part and support the beautiful mission of helping others in devastating circumstances.

Do your part and donate to Concern Worldwide U.S. today