Owner Lanora Davidson sells an array of artisan products from Ireland, Scotland, and Wales. If you're looking for a Celtic gift, you're sure to find it here. 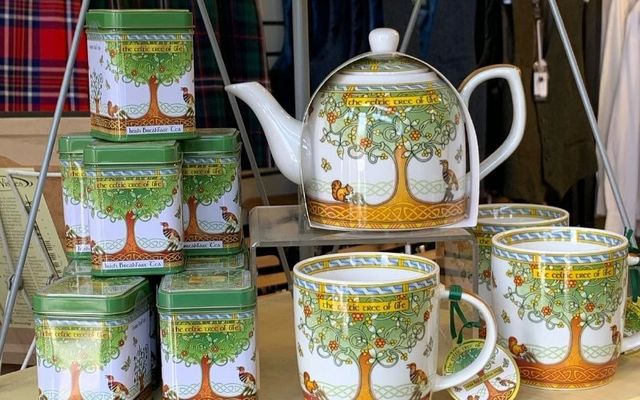 Things Celtic is known as the “Best Little Irish Shop in Texas,” and brings artisan Celtic products to Dublin, Texas.

Originally established in 1997 by Lanora Davidson in Austin, Texas as a unique festival booth specializing in Celtic products including jewelry, clothing, gifts, and art.

In 1999, after two years of festivals and markets, Lanora opened a brick-and-mortar store on Lamar Blvd. in Austin. Things Celtic was an instant success and a year later the store was doubled in size.

Most of the items sold in the store are imported directly from artisans in Ireland, Scotland, and Wales, but they also carry products made by Celtic artists in the United States and Canada.

Some of the traditional Irish items sold at Things Celtic

The year 2001 presented huge hurdles for many small businesses and Things Celtic was no exception. Unfortunately, the store was also hit by a flash flood in November that year, but with the help of volunteers and flood insurance, they were able to recover in time for the Christmas season.

Things Celtic moved to a new location on West 35th Street in Austin in 2003, where they spent 15 years.  As Austin doubled in size and traffic patterns and demographics changed, Lanora realized it was time for the store to also make a major change.

"One day in January of 2018 I Googled 'small tourist towns in Texas' and Dublin, Texas popped up.  The next week I came to visit the town and immediately saw the potential not just for my business, but to help revitalize a community.  For over 80 years Dublin was known as the original bottling factory for Dr. Pepper, but after losing that franchise the town had slipped into a slow decline.

In an attempt at rebranding, the Governor declared Dublin the 'Irish Capital of Texas'.  The problem was that other than the street names and shamrock signage, Dublin, which had originally been a town established by Irish railroad workers, had lost most of its Irish identity.  Soon after visiting Dublin, I brought my store to town and began an effort to draw in tourists to Dublin," explained Lanora.

For Lanora the best part of every year is going to Ireland and Scotland to meet the makers and choosing new products for the store. Things Celtic is also the only shop in Texas that provides over 500 tartan designs including the Irish, Scottish & Welsh Tartans and is home of the Texas Lone Star Tartan.

In 2010, Things Celtic won the Celtic Warrior Award from the vendor members of the North American Trade Association for being an outstanding merchant in the Celtic marketplace. Then in 2017, Things Celtic received a proclamation from the City of Austin for 20 years of service to the Celtic community in Texas.

Now in 2021, Things Celtic has been selected as one of three national finalists by Gifts & Dec Magazine for the Retailer Excellence Award in the Specialist Shop category.  Things Celtic is always striving to offer the best service and products from Ireland and the other Celtic nations.

Things Celtic is open seven days a week and after Covid, Lanora hopes to focus on streamlining the website and hosting monthly Facebook Live sales to reach customers all over the nation.

Things Celtic is located at 115 E Blackjack Street, Dublin, Texas 76446. You can contact them on +1 254-445-0103 or visit the Things Celtic website for more information. You can also check them out on Facebook.