GOAL appeals to the Irish diaspora to walk or run a virtual mile this Christmas to support the world’s most vulnerable communities.

In partnership with
GOAL 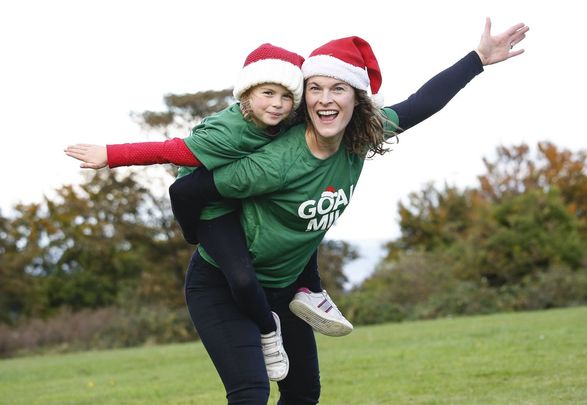 Irish humanitarian aid agency, GOAL, is appealing to Irish abroad to support the world’s most vulnerable communities by running, walking, or jogging a GOAL Mile this Christmas.

While thousands of diaspora won’t be able to travel home for the holidays due to COVID-19 restrictions, they can join their fellow countrymen and women wherever they are by signing up to do a virtual GOAL Mile.

The GOAL Mile is a much-loved tradition when family and friends all over the country take time out on Christmas Day to do a Mile to support GOAL's work in 14 countries in Africa, Latin America, and the Middle East.

Last year GOAL reached more than six million people in need with nutrition, health, livelihood, and emergency response support. They include infant triplets Nyachua, Nyajuak, and Nyakime who were born in a refugee camp in Gambella, western Ethiopia, in March. Thanks to GOAL intervention the triplets, who were on the brink of starvation are now thriving. (See case study below). 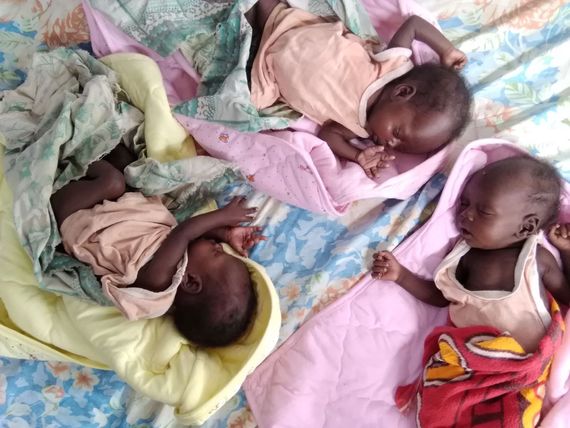 Many of those who traditionally take part in the GOAL Mile in villages and parishes all over the country at Christmas are Irish people home for the holidays, taking advantage of the GOAL Mile to reconnect and catch up with friends and neighbors at what is a special time of the year.

However, due to COVID-19 restrictions GOAL has announced that the traditional GOAL Mile will be going virtual this year. But the silver lining is Irish abroad who will not make it home can join in the festive fundraiser wherever they are – be it New York, London, Bangkok, Sydney or Paris.

“I am appealing to Irish communities all over the globe to support GOAL’s work by registering to do a virtual GOAL Mile this Christmas. There are many who would have taken part in the event at home but will be unable to travel due to COVID-19. So they can join in on the fun wherever they are in the USA and make a virtual connection. “

He added: “The Irish have never been found wanting when it comes to supporting those in our world most in need. We are renowned for our generosity. Whilst this Christmas we are all being asked to keep apart, all of us at home and abroad can stand together by doing a virtual GOAL Mile.” 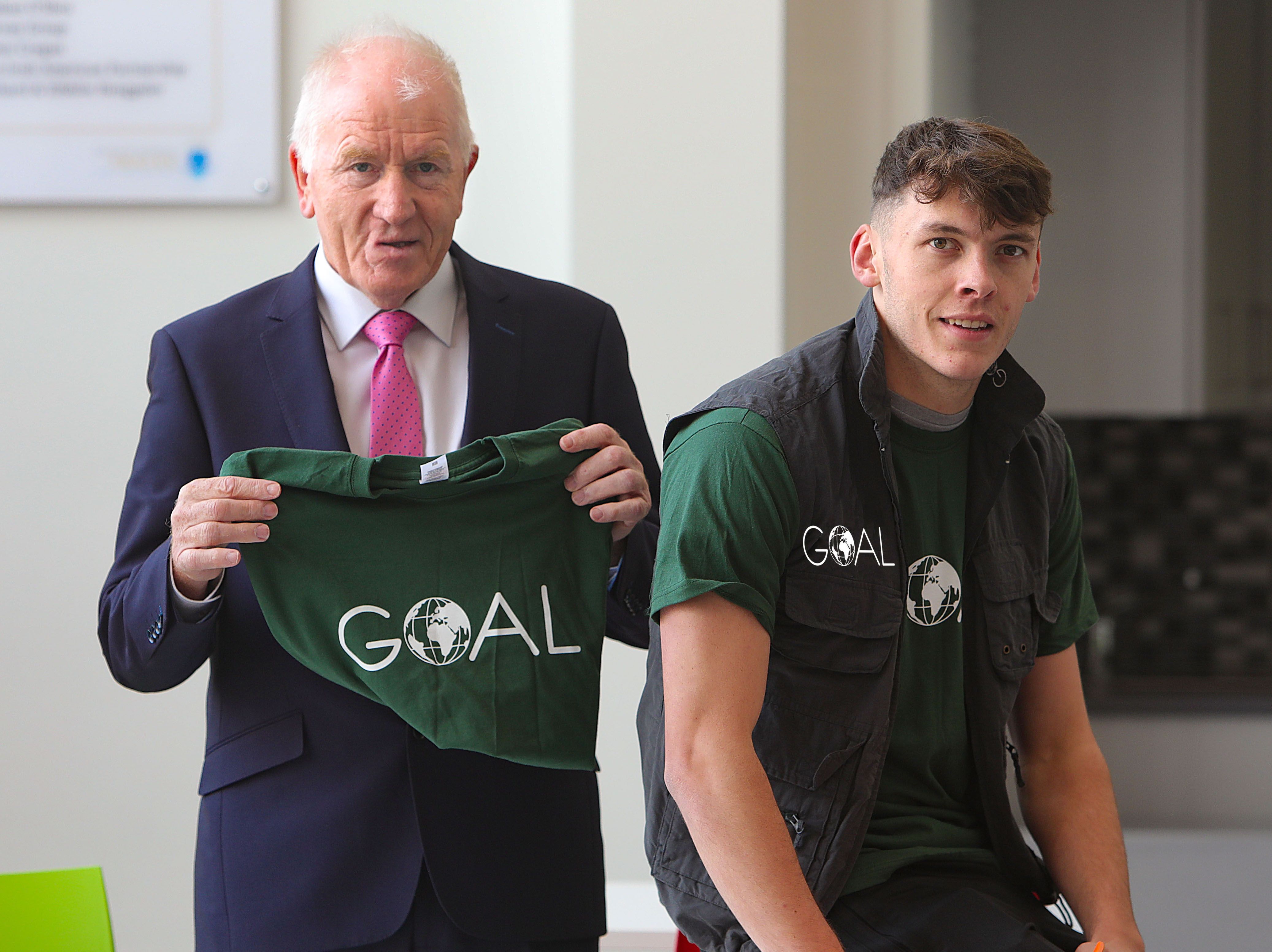 GOAL Director of Fundraising, Eamon Sharkey, said: “The Irish community has always been hugely supportive of GOAL’s work, wherever they are around the globe. Our target this Christmas is to get 10,000 people at home and abroad register to do a GOAL mile.”

He said: “The pandemic means the GOAL Mile is more important than ever as we work to rebuild communities shattered by disease, conflict, and climate change. Since March  GOAL has supported over 17 million people in our thirteen countries in preventing the spread of the virus,  rolling out COVID-19 awareness programs and teaching people the importance of keeping a safe distance, wearing masks, and observing handwashing regimes. We could not do this without the support of Irish people everywhere.”

You can register to do a GOAL Mile at www.goalglobal.org/goal-mile.

A GOAL story of change from Ethiopia 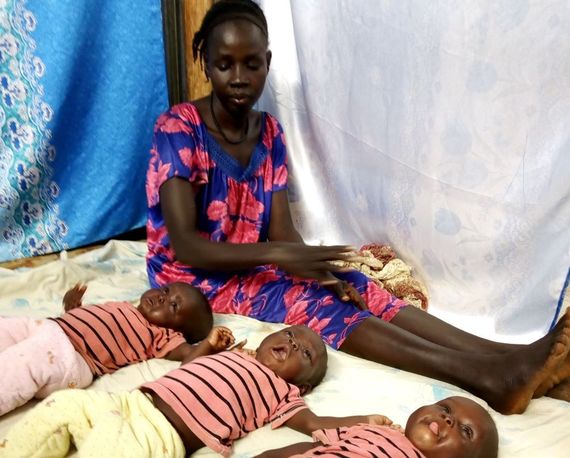 Smiling six-month-old triplet girls Nyachua, Nyajuak and Nyakime had a challenging start to their lives after they were born in Gambella refugee camp in Ethiopia in March.

As the world came together to fight the threat of COVID-19, the triplets had a huge fight of their own. Two of the triplets were found to be suffering from life-threatening severe malnutrition in their early weeks. Thankfully, GOAL staff was there to intervene and the babies received the vital treatment they needed to survive. They are now thriving.

Help came in the form of GOAL’s innovative infant nutrition program, Management of At-Risk Mothers and Infants (MAMI). GOAL became the first International NGO to trial the innovative nutrition program in 2016. The MAMI program targets infants from birth up to six months of age, with GOAL implementing the initiative at four separate nutrition sites in two refugee camps at Tierkidi and Kule in Gambella. 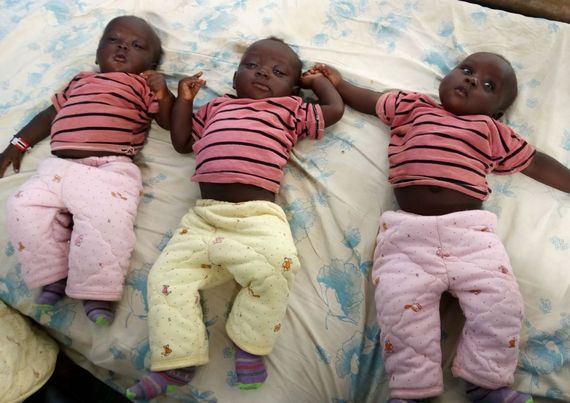 Join the virtual GOAL Mile: Nyachua, Nyajuak and Nyakime who were born in a refugee camp in Gambella, western Ethiopia, were on the brink of starvation are now thriving.

The program brings together a preventative and curative approach to infant malnutrition. And in the last four years GOAL has supported over 4,000 infants malnourished annually at these two large camps in Gambella.

The development of the MAMI program was triggered by the historical assumption that all women could and should breastfeed infants from birth to six months. However, the UN estimates that only around 40% of the global population of under six months are exclusively breastfed. And it is estimated that approximately 8.5 million infants between birth and 6 months are suffering from acute malnutrition.

The triplets mum, Nyakan, has overcome many challenges that life threw at her. She grew up in the South Sudanese village of Mathiang. And like so many other children in her home village, there was limited access to health and education. She married when she was just 18 and had her first child.

Due to conflict during the South Sudanese war in 2014, Nyakan was forced to flee her village with her two-year-old daughter. It was a harrowing journey. Nyakan and her daughter were lucky to survive.

Surrounded by a safe support network and her loving family, Nyakan is now thriving.

After giving birth to the triplets Nyakan presumed she would not be able to produce enough milk to feed them all. However, with support and guidance from GOAL’s counselor, she started breastfeeding confidently.

Alongside medical support, Nyakan has also been provided with a hygiene kit containing soap, buckets, baby clothes, and blankets. She has been enrolled in GOAL’s Targeted Supplementary Feeding Program (TSFP) where she will continue to receive support.

Thanks to the MAMI program, and this vital support, Nyakan is so happy that her babies are thriving and healthy.

*MAMI was conceived by the Emergency Nutrition Network (ENN) and the London School of Hygiene and Tropical Medicine (LSHTM).  GOAL was the first organization globally to trial it.

Register to do a GOAL Mile at www.goalglobal.org/goal-mile