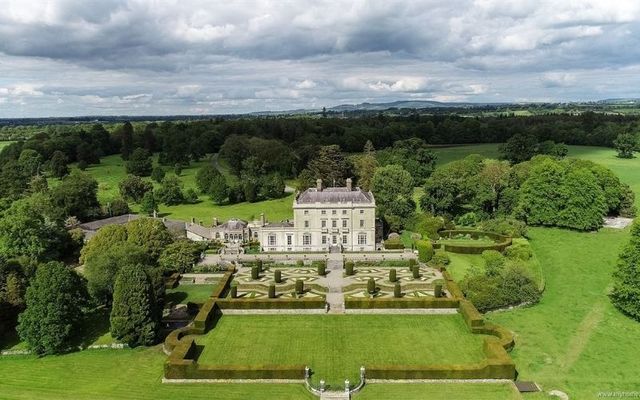 The mansion is situated on a huge 1,100-acre site in Laois. myhome.ie/sotheby's international realty

Collison acquired the 18th-century mansion, which is thought to be one of the finest property's in Ireland, two years after it was brought to the market by joint agents Sotheby's International Realtors and Colliers.

Meanwhile, the property's principle yard boasts a clocktower built out of local limestone dating back to 1822.

The house is approached by a one-mile wooded drive and is located just outside the heritage town of Abbeyleix.

The mansion was home to the De Vesci family for more than 200 years before it was sold to businessman Sir David Davies in 1995. Davies enjoyed a successful career in finance and banking and put the property on the market in 2019 after turning 80.

Davies bought the property in a state of disrepair and spent more than four years restoring it to its former glory. The mansion had no central heating and needed to be completely rewired, Davies said in a 2017 interview with the Leinster Express, while all 117 windows in the property had to be replaced.

The house is still in need of some renovation, according to reports, and Davies said that he believes that Collison will ensure the continued preservation of the property.

"The selection of the buyer was made because of their ambition and interest in preserving the integrity of the estate, including buildings and importantly the trees, and their ability to invest in the estate," Davies said in a statement.

Collison, who is thought to be one of Ireland's richest people along with his brother Patrick, is well placed to invest in the sprawling Abbeyleix estate.

The Collison brothers are thought to be worth an estimated $11.5 billion due to the booming success of their internet payment processing platform Stripe, placing them amongst the richest self-made millennial billionaires.

Stripe currently employs more than 300 people at its Dublin engineering hub and describes itself as being "dual-headquartered" between San Francisco and the Irish capital.