In 1962 JFK proclaimed that the week surround May 15 would be dedicated to "appreciation for all those who currently serve on the front lines of the battle against crime." 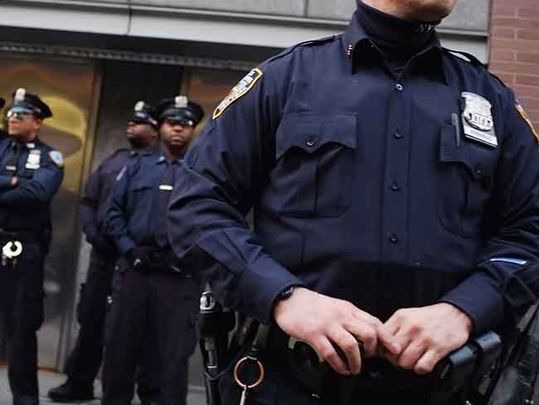 Today we salute Peace Officers Memorial Day and those police officers who keep the public safe every day. Getty

In 1963, President John F. Kennedy signed a proclamation which designated May 15 as Peace Officers Memorial Day.

"To pay tribute to the law enforcement officers who have made the ultimate sacrifice for our country and to voice our appreciation for all those who currently serve on the front lines of the battle against crime" the United States Congress approved President John F. Kennedy's proclamation.

Ordinarily, in a world without COVID-19, tens of thousands of law enforcement officers from around the world converge on Washington, DC to participate in a number of planned events which honor those that have paid the ultimate sacrifice.

While this year's celebrations have been largely canceled here at IrishCentral we would still like to pay tribute to all those serving the frontline and say "Thank you for your service".

More commonly known as National Police Week It has grown to a series of events that attract thousands of survivors and law enforcement officers to our Nation's Capital each year. Unfortunately, all plans for such an event have had to be canceled.

Here is some coverage, including President Donald Trump's speech on Peace Officers Memorial Day in 2019:

The National Peace Officers Memorial Service which includes the Candlelight Vigil would usually occur on May 15 and would ordinarily draw in between 25,000 to 40,000 attendees. Sadly, this year the National Fraternal Order of Police President Pat Yoes announced that they "will be unable to host the 39th Annual National Peace Officers’ Memorial Service in Washington, D.C. due to the COVID19 pandemic. This decision was a difficult one, but we believe it is the right one."

Read more about The Kennedys on IrishCentral here.

It is important, we think, as President John F Kenedy intended back in 1962 we review his 1962 proclamation.

"Whereas, from the beginning of this Nation, law enforcement
officers have played an important role in safeguarding the rights and
freedoms which are guaranteed by the Constitution and in protecting
the lives and property of our citizens; and

"Whereas, through constant application of new procedures and
techniques, such officers are becoming more efficient in their enforcement of our laws; and

"Whereas, it is important that our people know and understand
the problems, duties, and responsibilities of their police departments
and the necessity for cooperating with them in maintaining law and
order; and

"Whereas, it is fitting and proper that we express our gratitude
for the dedicated service and courageous deeds of law enforcement
officers and for the contributions, they have made to the security and
well-being of all our people; and

"Whereas, by a joint resolution approved October 1, 1962 (76
36 use 167. Stat. 676), the Congress has requested the President to designate
May 15 of each year as Peace Officers Memorial Day and the calendar week during which such May 15 occurs as Police Week:

"Now, therefore, I, John F. Kennedy, President of the United States of America, do hereby designate May 15, 1963, and May 15 of each succeeding year, as Peace Officers Memorial Day, in
honor of those peace officers who, through their courageous deeds,
have lost their lives or have become disabled in the performance
of duty.

"I also designate the week of May 12 through May 18, 1963, and the
calendar week during which May 15 occurs of each succeeding year,
as Police Week, in recognition of the service given by the men and
women who, night and day, protect us through enforcement of our
laws."

Would you ordinarily observe Peace Officers Memorial Day? Tell us some good tales about Irish American cops you know to celebrate those who have given their lives.