"Moving Crib Tells Christmas Story" is a 1963 Irish newsreel showing one of the beloved Christmas traditions in Dublin City. 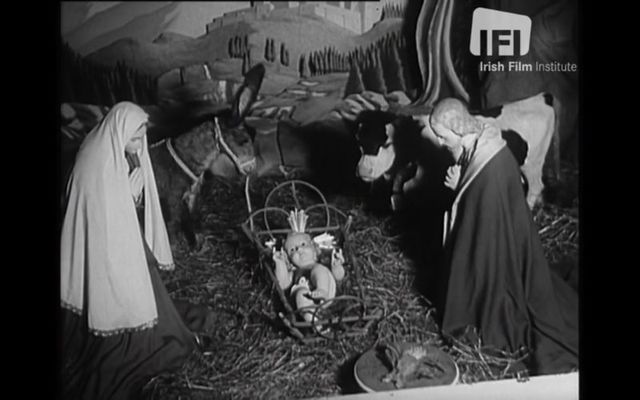 A popular Dublin Christmas tradition was a visit to The Moving Crib in Parnell Square. A nativity scene was created using over 100 mechanical handcrafted figures set against a delicately hand-painted backdrop.

The Moving Crib (based at St Martin Apostolate, 30 Parnell Square) opened in 1956. Visitors can enjoy a colourful array of bible scenes from Adam and Eve and Noah’s Ark to the Christmas nativity scene. In 1977, St Martin Apostolate relocated to 42 Parnell Street where the festive event is still a popular attraction.

Produced by Gael Linn, Amharc Éireann (A View of Ireland) is Ireland’s longest-running indigenous newsreel series. It was distributed to cinemas throughout the country to promote the Irish language. The first 36 issues were produced as single-topic films which were released monthly, followed in 1959 by weekly, multi-story newsreels featuring a broad range of topics, from hard news stories to lighter magazine-style items. Between 1956 and 1964, 267 editions of the newsreel were produced for cinema exhibition.

To see more of the Gael Linn Collection, click here.

In 1955 Ernest Blythe, Chairman of Comdhail Naisiunta na Gaelige, lent Gael Linn £100 to produce a short film for cinema and the Amharc Éireann (A View of Ireland) newsreel was born. From 1956 to mid-1957 Amharc Éireann consisted of short single story items that were distributed to cinemas throughout the country on a monthly basis. Their popularity was immediate and by mid-1957 the Rank Film Distributors agreed to supply them to Irish cinemas along with their own newsreel, at which point they became issued on a fortnightly basis.

Produced by Colm O’Laoghaire, a total of 267 editions of Amharc Éireann were made. Although Gael Linn’s Amharc Éireann production ceased in late 1964 its influence is ongoing. The range of Irish interest subjects covered (from hard news stories to more magazine-like items) provide a vivid window into the development of modern Ireland at a particularly progressive point in its development and provide a first-hand insight into the moral, cultural and economic development of the country throughout the Whittaker and Lemass eras.

"Moving Crib Tells Christmas Story" is published here with kind permission of Gael Linn and with thanks to the Irish Film Institute (IFI), who IrishCentral has partnered up with throughout 2022 to bring you a taste of what their remarkable collection entails. You can find all IrishCentral articles and videos from the IFI here.

(For more Christmas content from the Irish Film Institute, check out their Christmas Crackers collection here!)