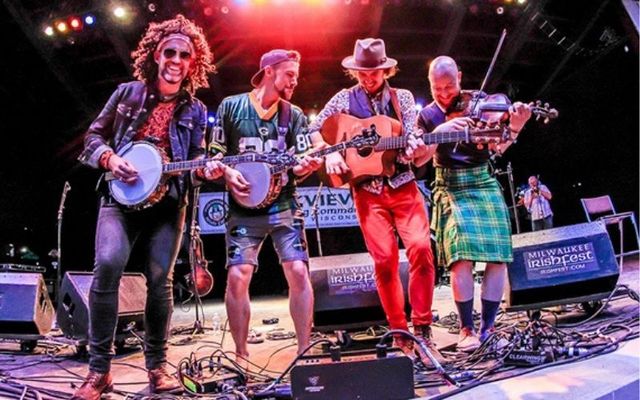 Milwaukee Irish Fest, the world’s largest Irish festival, announces their entertainment lineup for 2013. With several exciting acts and a Nova Scotia Showcase, guests will want to stay and play during all four days of the festival. The annual celebration takes place August 15 to 18 this year on Milwaukee’s lakefront.

“We travel the world in search of the finest in Celtic entertainment,” said Patrick Boyle, executive director of Milwaukee Irish Fest, who visited Ireland and Nova Scotia this year. “After seeing many phenomenal bands perform in their home towns, we cannot wait to share their talent with our guests.”

With more than 100 acts performing this year ranging from world-class musicians to award-winning dance troupes and choirs entertainment highlights include:

Each year, Milwaukee Irish Fest highlights an aspect of Celtic music and culture. This year’s showcase is Nova Scotia, the Canadian province whose name means “New Scotland.” Nova Scotia is home to a very unique brand of Celtic music rooted in the traditions of the 18th century Scottish immigrants who arrived there after the Highland Clearances. Guests can expect a wide variety of the Irish and Celtic song and instrumental traditions of Nova Scotia in the Showcase.

“Given our history and unique cultural experiences, Nova Scotia has become one of the major international centers for traditional Celtic music. We're delighted once again for the opportunity to bring some of our finest performers to Milwaukee Irish Fest and we will continue to foster our long-term relationship with one of the most important and largest events of its kind in the world,” said Brian Doherty President of Music Nova Scotia who is partnering with Milwaukee Irish Fest on the showcase.

The Gaelic language is a huge part of the music tradition in Nova Scotia and Mary Jane Lamond and Wendy MacIssac will perform several songs in Scottish Gaelic. Evans and Doherty bring the traditional Irish Folk songs with them to Milwaukee as does Buddy MacDonald with his story telling and Cape Breton ballads. Lastly, Sprag Session will deliver high energy sets of Celtic fusion with traditional fiddle driven by drums, bass and guitars.

Guests will be invited to gather ‘round as they are treated to special Kitchen Party set during the opening night of the festival with artists from Nova Scotia. A tradition in Nova Scotia, a Kitchen Party is a musical jam session typically held at someone’s home.

Returning for their 14th year in a row, audiences will be sure to enjoy the Celtic Rock of headliner, Gaelic Storm. The growing success of Gaelic Storm traces back to their appearance as the party band in the movie, Titanic. This year the band welcomes a new fiddle player, Kiana Weber, who will carry on the tradition of putting on an action-packed show. Other headlining Celtic Rockers include Dublin 5 and The Elders.

Tom Paxton, a well-known American songwriter from the Peter Seeger group who recently received the Lifetime Achievement Award from the GRAMMY Foundation, will return to Irish Fest this year.

Festival headliners appearing for the first time include: The Willis Clan, an award-winning family band of 12 children from Nashville that has toured with Brad Paisley; Cutthroat Shamrock, a regional band covering the genres of punk and bluegrass; and Creel, the house band at Raglan Road Irish Pub in downtown Walt Disney World.

When it comes to folk headliners, audiences will enjoy The Makem and Spain Brothers and Evans and Doherty.  On Saturday night, the groups will collaborate along with Tom Sweeney for a special performance as the combined act, Seven Deadly Sons. Additional folk headliners are Ed Miller and Tom O’Carroll.

Rounding out the featured artists are: Kevin Burke, who will wow audiences with his fiddle playing, and bands Bohola, Nashville Ceili Band, and Switchback who blend Traditional Irish music with contemporary styles.

An exciting freshman class of bands will make their first appearance at Irish Fest. Two of the must-see acts are: JPTrio and Niamh Farrell, a young, traditional band from Ireland and Ronan Tynan, a famous Irish tenor most known for his moving performances of “God Bless America” following 9/11.

Several new artists hail from Nova Scotia and are part of the featured showcase. They are: Cassie and Maggie MacDonald, who blend original and Celtic music; Mary Jane Lamond and Wendy MacIssac, who are returning roots and Trad artists who will perform together at Irish Fest for the first time; The Modern Grass, a band that fuses folk, roots and bluegrass; and Old Man Luedecke, who performs narrative-driven folk songs.

Representing the Galician part of Spain is Carlos Núñez, a world-renowned piper who has previously played with the Chieftains. And from Scotland, Manran recently performed their infectious blend of Traditional and contemporary music at the 2012 London Olympics.

A variety of musical styles will be represented by artists from Ireland and Northern Ireland. They are: We Banjo 3, an all banjo band; Tom Sweeney, who stays true to the ballad tradition; The Screaming Orphans, who adds pop and rock strains to melody-driven songs; and Goitse, who blends modern rhythms and traditional melodies.

Additional bands from Ireland who are performing for the first time this year are JPTrio and Niamh Farrell and Ronan Tynan.

Not to be confused with the Red Hot Chili Peppers (who consider themselves among the legion of fans), the Red Hot Chili Pipers are an energetic band that has played at both the 2012 London Olympics as well as private parties for Richard Branson. Mànran is the only band to make it into the Top 40 UK Singles Chart with a Scottish Gaelic song.

For more information on the Milwaukee Irish Fest visit IrishFest.com.