U2 release new single ahead of Jimmy Fallon show

“You’re the Best Thing About Me” was released ahead of the new album Songs of Experience's release on Dec 1 to coincide with World AIDS Day. 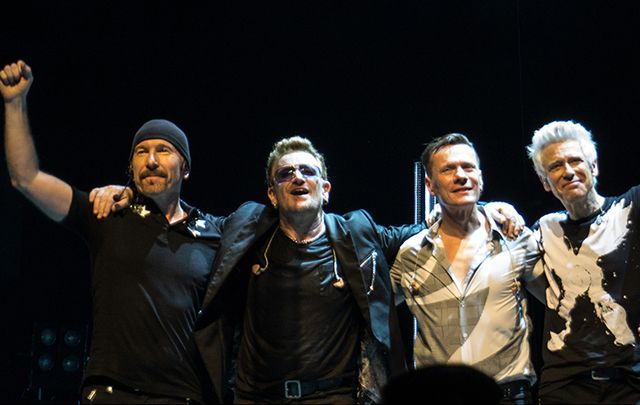 U2 are back on the road in the United States for the next three weeks before winding up their hugely successful Joshua Tree tour in South America at the end of October, and fans waiting for new music from the band will surely relish the fact that on Wednesday they released the single “You’re the Best Thing About Me” from U2’s upcoming album, Songs of Experience. The band have been hanging out in New York, and were even spotted sampling the famous Ray's Pizza. They're set to appear The Tonight Show Starring Jimmy Fallon on Thursday night.

This is first single from the album Songs of Experience, which is expected to drop on December 1 to coincide with World AIDS Day. The single is actually the second song that U2 released from its album. “The Blackout” debuted on August 30, with a message from the band to its fans.

"'The Blackout,' just for you. From upcoming album 'Songs of Experience.’ Tune in August 30th. First single, 'You're The Best Thing About Me' coming Sept. 6th, along with all the album news. #U2TheBlackout#U2SongsofExperience. In the darkness where we learn to see,” the band posted on social media.

U2’s remaining U.S. tour dates do not include the East Coast, but rather locations such as Kansas City, New Orleans, Phoenix and San Diego. Multiple reports indicate that the band will commence another tour in 2018 to support Songs of Experience.

"I think after the album (comes out) we'll really have a good idea what next year holds for us,” U2’s production director Jake Berry told Billboard magazine.

"We weren't coming back," Berry added of U2’s September U.S. dates. "We were going to take a break and go to South America. (But) the success was beyond everybody's wildest dreams, to be perfectly honest. We couldn't get enough...we kind of think in some respect we'd started earlier so we could do more shows. So rather than give us two months off we said just take a month and we'll throw four weeks of America."

U2 opened the new leg of its U.S. tour on Sunday night in Detroit, with another show in Buffalo on Tuesday.