Parting Glass whiskey advert the "envy of other booze ads"

This ad from Tullamore Dew received rave reviews -.watch to the end for the twist! 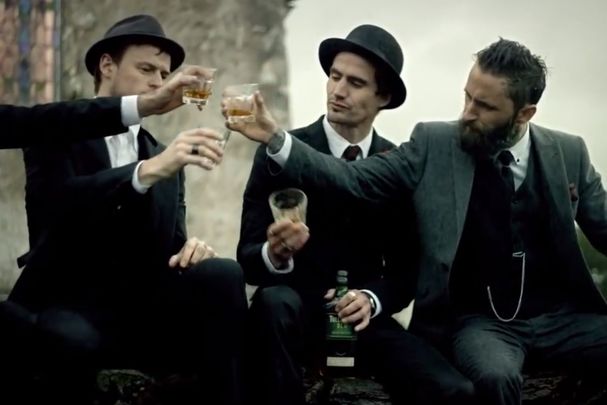 Is this Tullamore Dew short film the best whiskey advert there ever was?

An advertisement released by Tullamore D.E.W., one of Ireland’s most popular whiskeys, in 2013 received rave reviews from Huffington Post Taste, Advertising Age and Creative Online as an “awesome surprise” and the “envy of other booze ads." And well deserved.

The short film, “The Parting Glass,” follows a group of young suited friends walking through the Irish countryside in the rain to a graveyard where they raise a glass of whiskey to a friend. There’s a nice twist at the end.

The song “The Parting Glass,” a Scottish and Irish traditional song often sung at the end of a gathering of friends, is heard throughout. As the men march up the hill James Joyce is quoted.

“Better pass boldly into that other world, in the full glory of some passion, than fade and wither dismally with age.”

The short film does well to showcase Ireland (its countryside and culture) while marrying a more modern view through the tattooed, well-turned-out young men.

The ad originally ran in Europe. It was created out of a New York boutique agency, Opperman Weiss, and was directed by Laurence Dunmore.