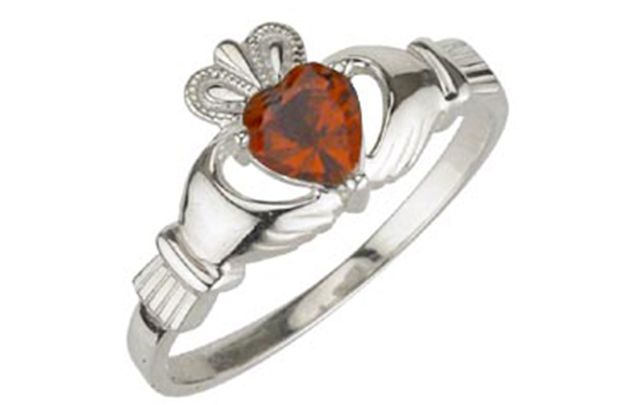 In addition to star signs, people mark the time of the year at which they were born with birthstones, a practice that dates back to ancient times.

Initially, the gemstones were tied to the zodiac signs, and people encouraged to wear the corresponding stone as each phase passed, but eventually the stones were tied to the 12 months of the year, and the tradition began of wearing the stone for the month of one’s birth to afford you good luck and protection throughout the year.

There’s no better way to celebrate both your love for Ireland and your birth month than with a Claddagh birthstone ring. The IrishCentral Shop has all 12, in sterling silver and gemstone, from Solvar Jewelry. The iconic Irish Claddagh historically represents love (the heart), loyalty (the crown) and friendship (the hands).

The garnet, January’s birthstone, symbolizes protection, guidance, faith and love. The deep red gemstone gets its name from granatus, the Latin for “seed,” due to its resemblance to pomegranate seeds. Because of their high ability to refract light, they were thought to protect sailors and travelers at night, illuminating the way. It’s also an energizing and revitalizing stone.

See the entire Claddagh Birthstone collection in the IrishCentral Shop.