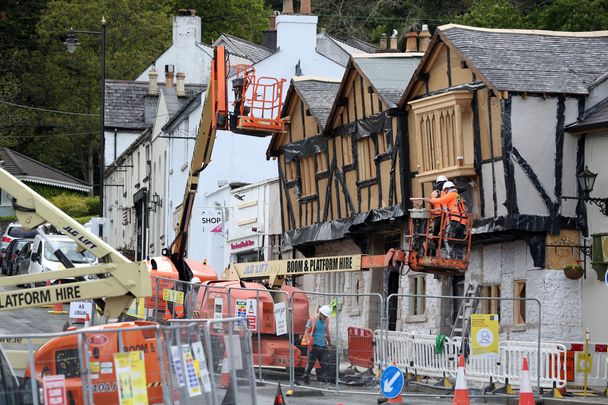 Building the sets for "Disenchanted" in Enniskerry, County Wicklow. RollingNews.ie

The upcoming Disney movie Disenchanted set up shop in Ireland some weeks back with Patrick Dempsey and Amy Adams leading the way, but lots of other big names have touched down to film their parts and they’ve been quite enchanted by the Emerald Isle.

Maya Rudolph, the Bridesmaids and Saturday Night Live star who has a recurring role on SNL playing VP Kamala Harris, told Magazine+ that she’s having a great time on and off set.

Last year we had .@RealMattDamon enjoy the beaty of Dublin Bay, this year .@MayaRudolph has been enjoying trips around the bay on .@IrelandsEyeFerr
Well if it's good enought for the Hollywood Elite...https://t.co/8Ct3maPnDC#lovedublinbay .@Failte_Ireland .@Fingalcoco pic.twitter.com/Htpbyv1MdV

She’s even eating like a local, enjoying a famous 99 vanilla cone, and talking like one too, saying that she’s having “good craic” – craic being fun, of course.

"I had my first 99 today. I feel like an honorary Dubliner," she said. "It's heaven on earth. I feel very lucky to be here. I understand why this is a very special place.

"I wish that I could take everything I've learned so far home with me and I wish everyone was as smart as the Irish in the way that they live.  It's pretty amazing here."

Thanks so much to @MayaRudolph and @YNB for dropping into us today for lunch!
It was a pleasuring having you both with us and we’re looking forward to welcoming you back soon. #Dalkey #WeekendVibes #Hollywood #DalkeyLife #MayaRudolph #YvetteNicoleBrown #Dublin #HottestSpot pic.twitter.com/pKFUHbfqV3

Two of the stars of Enchanted, the hugely successful film that prompted the Disenchanted sequel, Idina Menzel and James Marsden, also landed in Ireland last week. Dempsey has been there since May and is constantly posting gorgeous photos of his Irish travels.

Disenchanted has taken over the towns of Enniskerry and Greystones in Co. Wicklow, with sets designed around existing buildings. It’s been a real boom for the local economy with lots of locals hired for the construction, and to take part in the film as extras too.

Director Adam Shankman pronounced himself mighty pleased with the film so far. “#Irish #sunset on one of the hardest most extraordinary weeks of shooting I have ever done. Halfway done today with #Disenchanted and I am overwhelmed with gratitude for the 300 plus enchanting people whose hard work made it possible so far. My thanks for this one is profound,” he said on Instagram.

They’ll be shouting “it’s a wrap” next month, and then it’s back to LA for the finishing touches.

*This column first appeared in the July 17 edition of the weekly Irish Voice newspaper, sister publication to IrishCentral.