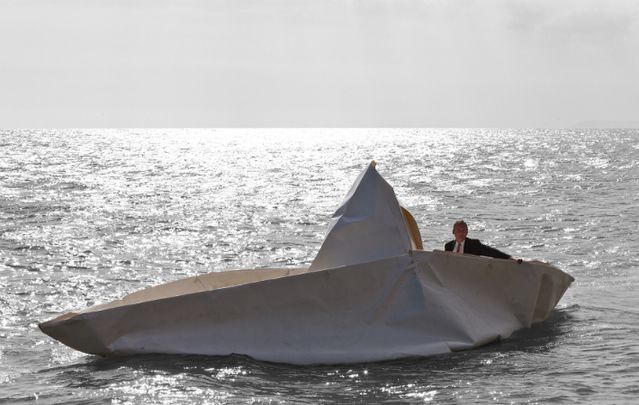 A German artist, with the help of Kinvara, County Galway residents (young and old), created a ten-meter (30 foot) boat of paper and successfully launched it into Galway Bay, much to the public's delight.

Frank Bôlter was the artist behind the project, carried out in collaboration with the Galway 2020 European Capital of Culture bid, Tulca festival of visual arts, and Sea Fest, which took place last weekend. The German artist used the principle of the Japanese art of paper folding, origami, to create a sea-worthy boat, which held his weight.

Bôlter started out with a giant sheet of paper. With the help of 60 people, the public and members of the Kinvara Sailing Club, he folded the paper and launched the boat on Friday. Then, on Saturday, with the help of the Port of Galway Sea Scouts and Galway City Sailing Club, the artist sailed his paper boat into Galway Harbour for Sea Fest where he was joined by a flotilla of Galway Hookers.

The artist, known for his paper creations, has previously launched paper boats on the River Thames in London, in Germany and at other locations in Europe. Bôlter told the Irish Times that the boats must be nine or 10 meters long or "it collapses under its own weight."

After testing the boat's seaworthiness at Kinvara he said, "This is a community-building moment, and it is about doing something you can’t do on your own."

He added, “The only water inside was from the rain, so it worked very well."

Originally Bôlter had planned to sail the boat across Galway Bay. However, the west of Ireland weather had other plans.

The Irish Times reports that if Galway 2020 wins its European cultural capital bid, Bôlter has promised to return and build a paper Galway hooker and sail it across the bay.