Neil Hannon, Cathy Davey, and Eve Belle will be performing on Tuesday, July 7 for the next episode of the 'Courage' live stream series, presented by Other Voices. Tune in here! 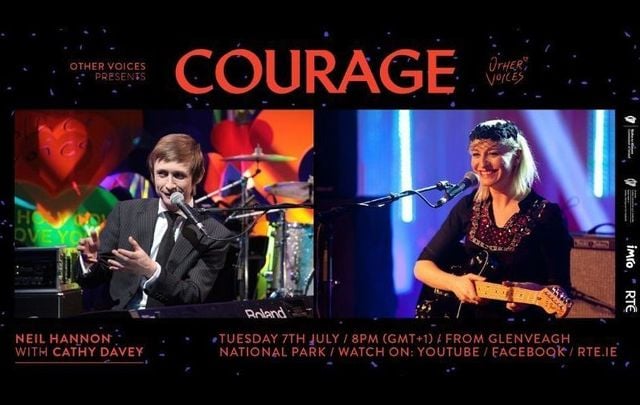 Neil Hannon and Cathy Davey will be joined by Eve Belle on Tuesday, July 7 for the 'Courage' live stream series from Other Voices in Ireland. Other Voices

The three Irish musicians feature in the next installment of the 'Courage' live stream series presented by Other Voices.

Neil Hannon, the veteran chamber pop musician who’s been making music under the moniker The Divine Comedy since the early 90s, will be joining singer-songwriter Cathy Davey and up-and-coming alt-pop musician Eve Belle for a live performance from Glenveagh National Park in Co Donegal on Tuesday, July 7.

You'll be able to tune into the live-stream concert, presented as part of the 'Courage' series from Other Voices, right here on IrishCentral and over on our Facebook page on Tuesday, July 7 at 8 pm IST / 3 pm EST:

In 1990, musical history was made when a 20-year-old Neil Hannon signed his first record deal and began releasing one glorious album after another under the name The Divine Comedy. Thirty years, twelve magnificent albums, and hundreds of spellbinding shows later, Neil Hannon is now, without doubt, a national treasure and one of the finest singer-songwriters of his generation.

On June 7th, 2019, The Divine Comedy returned with a record that was very much made for our current times. Office Politics came three years after Foreverland, an album which saw Neil Hannon and his rejuvenated band of co-travellers enjoy their highest ever chart placing (UK #7, Mojo Top 50 albums 2016). It’s a record steeped in ambivalence about the depersonalized nature of the human experience; a record populated by beleaguered ghosts who wandered into the machine of modern life without quite knowing how to get out of it again. But it’s also, for all the new synth textures and machine-tooled pop deviations, unmistakably a Divine Comedy album – endowed with all the heart, humour and hooks that fans have come to associate with the source of hits such as Something For The Weekend, Everybody Knows (Except You), National Express and Come Home Billy Bird.

Cathy was born in Dublin and grew up in Monkstown. She found her way into music almost accidentally. She was signed by Parlophone's Regal Recordings after a batch of home-recorded demos caused a bit of a stir, and she played her first live date shortly thereafter.

Spirited away to a studio in Wales, she set to work on her debut album with producer Ben Hillier, who'd previously worked with Elbow and Blur. The result, Something Ilk, was a gorgeous collection of songs both sultry and sweet, with melodies that soared and guitars that buzzed, drawing comparisons to PJ Harvey and all those other female songwriters that female songwriters often seem to draw comparisons to. At any rate, most of these comparisons fell by the wayside with time, as Cathy managed to wriggle out of the indie-rock role that Parlophone had given her. She'd never felt comfortable making her voice heard in label discussions, and found that her debut was "very much other people's idea of what I should sound like." She found it difficult to perform the songs with confidence, and began to yearn for more independence.

She took her time to make the follow-up, and made it on her terms. Tales of Silversleeve found its beginnings in some home demos Cathy recorded by herself, and brought with her, fully formed, into the studio. Over the three years since the release of Something Ilk, Cathy had learned how to have more faith in the songs themselves, and this time, with the help of engineer Liam Howe of Sneaker Pimps, the end result didn't stray far from her original vision.

Hit singles like 'Sing for your Supper', and 'Reuben' (a no. 1 radio hit) had a depth and emotional touch that she'd been hiding, and there was a confidence in her live shows, too, that won her many new converts. Keeping control of the creative process from inception to studio had paid off. As someone who had always craved the independence of songwriting, Cathy came into her own, no longer dreading the stage, but thriving in her live performances. Several full tours of Ireland followed, as well as well-received sets at prestigious international festivals such as SXSW and Eurosonic. In the end, Silversleeve would win Cathy a Choice Music Prize Nomination, and the Meteor Award for Best Irish Female. The Irish Times saying "There's no better female songwriter in Irish music right now.”

Silversleeve achieved her a place in the Irish Times top ten Albums of the Decade; the only woman and the only Irish artist to feature there. Tales Of Silversleeve would go on to achieve double-platinum status.

The Nameless has more of Cathy's personality in it than any of her previous work, and the effect is astonishing. There's a darkness here that is more prominent than before, but it's coupled expertly with songs as fine as anything she's ever written. Lead single 'Little Red' is the kind of song that will be adopted as a new national anthem, if there's any justice. A pop gem that grew out of long dark nights in that spooky old French house, it's got a soaring chorus coupled to a string section that swells and swoons. It's a fine indicator of the songwriting heights Cathy has reached. She's brought back members of her band too: Conor J. O'Brien has returned on to play some guitar and some drums, taking a break from recording his debut album as Villagers. The record is full of moments of genius, moments that grab you and explain, as only great music can, how beautiful life can be. In 2016 she released New Forest to widespread acclaim and in 2018 she released the live album Live At Dublin Unitarian Church, which captures the magic of a live Cathy Davey show.

Eve Belle is a young singer, songwriter, and chronicler of sorrows from deepest Donegal. Her songs and stories are imbued with an uncommon world-weariness seldom found in writers of such tender years.

In Eve Belle’s songs, the brass tacks prick skin and draw blood. Her observations are pin-sharp, she says: “My main focus as a writer is honesty across the whole emotional spectrum, this can take me from unabashed melancholia to tongue-in-cheek musings on the mores of modern love.”

In 2016, One of Eve Belle’s early songs, the aptly-titled, achingly beautiful ‘Too Young To Feel This Old’ came to the attention of Irish independent label Rubyworks. Around the same time, her evocative cover of Coldplay’s ‘Violet Hill’ found favour with Chris Martin & Co., and was widely shared online.

Eve’s Rubyworks debut, the 2018 ‘Things I Once Believed’ 5-track EP, was produced in London with Fred Cox, best known for his work with Grace Carter and Dodie. Eve opened for label-mates Hozier and Wyvern Lingo, as well as Mabel, as part of the promo-cycle for the EP. Eve then reworked ‘First Impressions’ from the EP with Irish hip-hop outfit Tebi Rex, which gave her a first taste of daytime airplay support and across-the-board, high-profile streaming visibility.

Neil Hannon, Cathy Davey, and Eve Belle will be performing on Tuesday, July 7 for the next episode of the 'Courage' live stream series, presented by Other Voices. Tune in here!