Milwaukee Irish Fest - An Irish celebration like never before

OVER - The world’s largest Irish Festival brings the best in Irish entertainment to Milwaukee, August 13 - 16. 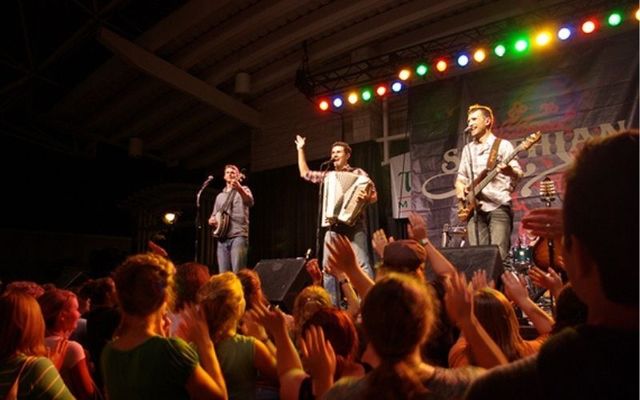 Once again, Milwaukee’s lakefront will be transformed into an Emerald Isle featuring the sounds, tastes and culture of Ireland for the 2015 Milwaukee Irish Fest.

The world’s largest Irish festival will host its biggest celebration yet by bringing in more new artists and events than ever before. Guests can expect to hear their favorite artists on the shores of Lake Michigan, while enjoying savory food, local and international merchants, riveting sport matches and the vibrant arts of Ireland.

Milwaukee Irish Fest is offering the widest selection of Irish and Celtic music to celebrate its 35th anniversary.

More than 100 Irish and Celtic acts on 17 stages will be performing. Guests can enjoy everything from traditional folk to Celtic rock. Plus, fan favorites such as Red Hot Chilli Pipers and The Willis Clan will be returning for the 2015 festival, with new emerging artists like Flashpoint and Kilkennys joining the celebration.

Since 1981, Milwaukee Irish Fest has been bringing traditional Irish music to American audiences.

Besides the top-notch performers featured at Milwaukee Irish Fest this year, guests can celebrate Irish culture through a variety of activities like shopping, dining, sports, arts and more. From the friendly Celtic Canines to the relaxing Jameson Lounge, there is an activity for everyone in the group.

Guests can get a taste of Ireland from cooking demonstrations at the Celtic Kitchen or show off their Irish baking skills in the baking contest.

Take a piece of Irish heritage back home with you from one of 90 merchants on the grounds. Sport enthusiasts can have their pick of tug-of-war matches, currach races, hurling matches, Lilli-Putt miniature golfing or even a 5k run/walk.

On Sunday morning festivalgoers are welcome to celebrate the Milwaukee Irish Fest Liturgy for Peace and Justice.

Shop more than 90 unique Irish vendors offering jewelry, art, textiles, and more at Milwaukee Irish Fest. Plus, get your...

More than a festival

Milwaukee Irish Fest is much more than an annual festival – it’s a year-round, global organization that is dedicated to promoting Irish heritage and culture through a variety of programming, including a school of music, archives, foundation and more.

The annual Milwaukee Irish Fest Summer School features classes that showcase the rich culture, history and traditions of Ireland and Irish America, past and present.

Plus, the Milwaukee Irish Fest Center in Wauwatosa houses the Ward Irish Music Archives – the largest public collection of Irish music in America consisting of more than 40,000 Irish music recordings and pieces of memorabilia.

See you in August

Milwaukee Irish Fest – along with its 4,000 volunteers – looks forward to celebrating 35 years with you and your family this summer.

You can find more information about the festival or get in contact with the organizers via: