Ed Sheeran, Jamie Dornan, Chris Martin and Niall Horan were among the celebrities who attended the lavish nuptials. 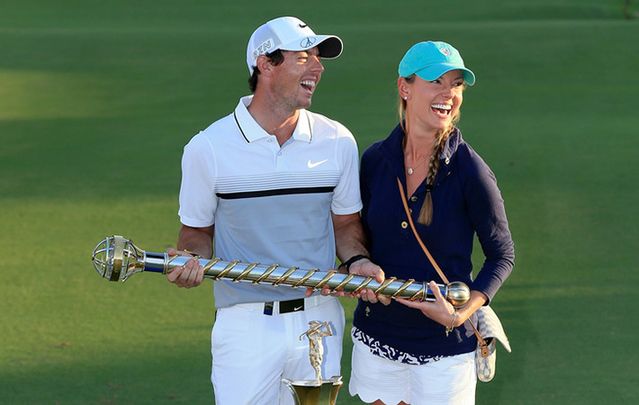 Rory McIlroy got hitched to American fiancee Erica Stoll at Ashford Castle on Saturday in a lavish ceremony. In attendance were Ed Sheeran, Jamie Dornan, Chris Martin and Niall Horan among other celebrities. Rory and Erica's wedding dance song was “Isn't She Lovely.”

Stevie Wonder and a 15 piece band performed for the happy couple and US Masters champion Sergio Garcia showed up as did many other golfers from the PGA ranks.

McIlroy, 27, who is worth an estimated $60 million, had the exclusive venue on lockdown throughout the weekend with media and locals kept far away from the festivities which are said to have cost a cool million.

Erica Stoll from upstate New York came into Rory McIlroy’s life almost by accident. A golf lover she became manager of Championship Volunteer Operations at the PGA of America. During the Ryder Cup in 2012, she noticed that McIlroy had not shown up as his tee time approached. She dashed to his hotel and discovered he had mistaken his tee off time. She got him to the course just on time.

Describing how the relationship blossomed from there, Rory McIlroy told Cool FM radio: "We were friends for a couple of years and we knew each other sort of from the golf circuit, and in summer 2014, towards the end of the summer, started to spend a bit more time together and it went from there."

Unlike Caroline Wozniacki the top tennis pro who was Rory’s previous fiancee she has little interest in a high publicity role and is almost anonymous following McIlroy around to his favorite tournaments.

Speaking about her, Rory stated: ”She is from America, which is why I like to spend time in Palm Beach. The past six or seven months have been really nice. That part of my life is going great."

In December last year, Rory popped the question in Paris, a moment which he later described as a “nice way to end the year.”

"She is a very low key person, not the kind to broadcast stuff, but that side of my life is really good just now. We are excited, our parents are excited so it is a really happy time,” he said.

"For me, Erica brings such a level of normality to everything. She has a calming presence, a sereneness and that’s not just on me; it is noticeable in any company. She never wants to be the center of attention and is always very comfortable in the background.

"She has been a great influence on me and has given such a great balance to my life - between who I am when people see me out here and who I am at home."

Now they are man and wife and clearly gloriously happy together.