If it sells for anywhere near the listing price, the actor's estate will be the most expensive Beverly Park property ever sold. 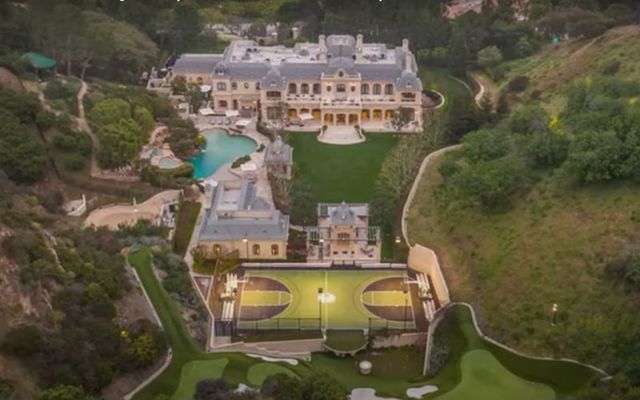 Actor Mark Wahlberg's Beverly Hills home is on the market for a whopping $87.5 million.

The six-acre property includes a skate park, a basketball court and a five-hole golf course.  The estate, located in the exclusive gated community of Beverly Park, has 12 bedrooms and 20 bathrooms.

The actor, who bought the property in 2009 for about $8.25 million, hired architect Richard Landry to design the more than 30, 000 square foot megamansion, which was completed in 2014. Wahlberg, 50, lived at the home with his wife Rhea Durham, 42, and their four children, reports Mansion Global.

Influenced in style by European chateaus, the main house boasts a formal motorcourt, a two-story foyer featuring an elaborate wrought-iron imperial staircase, limestone floors and hallways, a formal living room with two fireplaces and six sets of French doors, and an impressive wood-paneled library with a marble fireplace.

The home also includes a sunny breakfast room, an eat-in kitchen, and family room, reports Dirt.com.  Upstairs is a master bedroom suite with a sitting area, private balcony, and dual bathrooms and closets. In addition, there is a home theater, a wet bar, a wine cellar and tasting room, and a professional, glass-walled gym.

According to the listing with Kurt Rappaport of Westside Estate Agency, there are “beautiful gardens and lushly landscaped grounds including huge lawns, a five-hole golf course, a tennis court, a resort-like grotto pool, a skate park and a guest house, all set amidst total privacy."

In an interview with "Entertainment Tonight" ahead of his latest movie, “Father Stu," Wahlberg mentioned that he and his family would leave Beverly Hills “sooner rather than later.” His new film, based on the real life of a former boxer turned priest, will be released April 13.

If the home sells for anywhere near the listing price, the actor's estate will be the most expensive Beverly Park property ever sold.