The romantic historical drama is set during the World War I genocide of Armenians by Turkish troops. 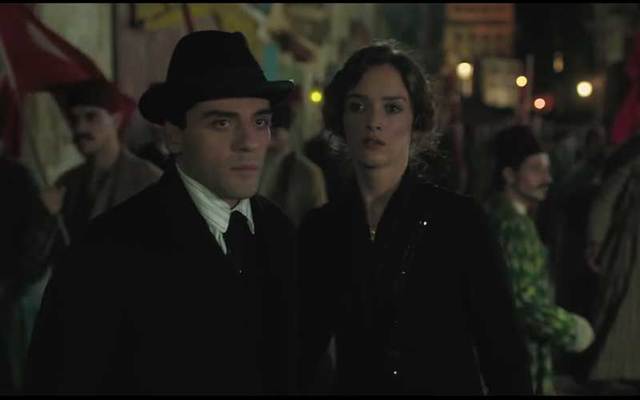 Screenshot of The Promise from official trailer. YouTube/Movieclips Trailers

Kim Kardashian has high praise for Irish filmmaker Terry George’s new movie 'The Promise,' a historical drama set during the World War I genocide of Armenians by Turkish troops.

“So proud of the movie #ThePromise Everyone please go see it and finally hear the story of the Armenian people,” tweeted Kim,

George, the Oscar-winning writer-director, told the Irish Times: “The Kardashians’ father, Robert, was an important figure within the Armenian community in California. So they are very into their heritage. Cher as well. So we had all these people at the premiere. Which is useful for getting the word out.”

So proud of the movie #ThePromise Everyone please go see it and finally hear the story of the Armenian people ??

The film, which stars Christian Bale, Oscar Isaac and Charlotte Le Bon, is a romantic drama but also recounts the systematic killing of 1.5 million Armenians between 1915 and 1917 by the Ottoman government, acknowledged as the first modern genocide.

Terry George directed the Oscar-nominated "Hotel Rwanda" also about a genocide. George, who is from Belfast and who was formerly an arts editor for our sister publication Irish Voice, understood immediately the political forces that created the genocide and its cover-up.

“I think that goes back to the end of the first World War,” said George. “Initially, the British occupied Istanbul – or Constantinople. They rounded up some of the genocide perpetrators and began putting them on trial. A few were executed. Then, as the British and the French began dividing up what was left of the Ottoman Empire, they needed the co-operation of people like Atatürk,” he said, referring to the founder of modern Turkey. “So the genocide perpetrators were turned over to the Turkish government, and the whole thing was brushed under the carpet.

“Subsequent Turkish governments have suggested that there was no systematic slaughter at all. Their story is that there was an uprising of Armenians in the north; that they had to move them out of that area; that there was a war on and people died. That revisionist version became the official version in Turkey and then the rest of the world,” said George, who first became familiar with the history through Samantha Power’s Pulitzer-winning book "A Problem from Hell: America and the Age of Genocide."

“What’s strange is that, at the time, this was one of the most heavily publicized stories on the eastern front,” he said, “to the extent that when Adolf Hitler was encouraging his generals in Poland to show no mercy, he said: ‘Who, after all, speaks today of the annihilation of the Armenians?’ That speaks to the revisionist movement by the Turkish government and their successors. This was an active campaign. And it was very successful.”

The film was largely financed by the late Kirk Kerkorian, an American-Armenian billionaire, but George said there was no additional interference from his benefactor, who had long hoped for an Armenian version of 'Shindler’s List,' the Irish Times reports.

“I never met the guy. He was ill by the time I came on board. The production company, Survival Pictures, had a script already, which I adapted. They were very positive about the fact I didn’t have any connection to the Armenian community. That I came from a neutral perspective was a plus to them.”

“The governor character who warns the missionaries and the orphans to get out is based on numerous governors and politicians who took a stand against this – and, indeed, who were often fired or killed for their efforts. As with any conflict there are good and bad on either side. I think it’s important to show that this was a political policy, not something all Turks supported.”

George’s personal history gives him a unique perspective on turbulent political history. He was born and raised in Belfast in 1952 and, as a teenager, in 1971 he was a trainee draftsman for the Northern Ireland Civil Service when he was arrested and detained for eight weeks without trial.

The Irish Times reports that he later became involved in the Irish Republican Socialist Party. In 1975 he was driving with armed members of the group when British soldiers stopped them. Although he did not have a weapon, he was sentenced to six years in prison. He was sent to Long Kesh: one fellow prisoner at the time was Gerry Adams; another was Patsy O’Hara, the third hunger striker to die in 1981.

In 1978, he was released for good behavior. George attended Queen’s University Belfast before moving to New York, in 1981, with his wife, Rita, and their daughter, Oorlagh.

He worked as a journalist before debuting his first play, 'The Tunnel,' in 1985. The play was based on an attempt to escape from Long Kesh in 1976.

He made his debut as a screenwriter and assistant director in 1993 with 'In the Name of the Father,' directed by Jim Sheridan and starring Daniel Day-Lewis.

he made his directorial debut with 'Some Mother’s Son,' which was inspired by the hunger strikers. He explored World War II in "Hart’s War," and Vietnam in 'A Bright Shining Lie.'

He said of his time in Long Kesh: “It had an enormous and direct impact on me in terms of storytelling. I guess now, 40 years or more later, you reflect on it as a part of your life that gave you a particular insight, particularly a political insight, that led to looking at other conflicts. And a lot of times you look and think, There but for the grace of God go I.”

He first broached the topic of genocide in his 2004 historical drama 'Hotel Rwanda.' “Very few people will make films like this or get the opportunity to do so. Hollywood doesn’t make films like this any more. It makes $200 million films about cars chasing submarines across the ice. So to get the chance to create characters that will take audiences inside a complex situation is a gift. Do research on almost any historical event or war and you’re going to run into difficult material. Pretty horrible stuff. But I still jumped at the opportunity.”