Winslet and Ronan star in Ammonite, an award-season favorite. 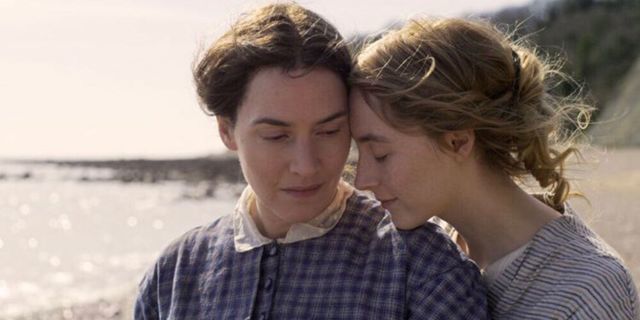 Saoirse Ronan had a memorable 25th birthday last year courtesy of her Ammonite co-star Kate Winslet, who specifically chose April 12 as the day they would shoot their love scene for the film, which opens in theaters on November 13.

It’s no surprise that Ammonite, loosely based on the life of British paleontologist Mary Anning (Winslet), and her relationship with a young neighbor (Ronan) in the 1840s, has been tagged as an awards-season favorite.  Both actresses have garnered decent reviews for their roles in the forbidden love story, but Kate wanted to make sure that Saoirse never forgot the day when they shot their memorable scene.

"I just wanted her to have, frankly, a great memory in her film life, regardless of how the scene played out or the movie turned out," she told Entertainment Weekly of her decision to time the scene with Saoirse’s b’day.

Winslet, who will live in our hearts forever thanks to Titanic, one of the best films ever made, shed further light on the day when she and Saoirse shot the film’s most talked-about scene.  For one, it was an all-female set on the day.

“We had a female boom operator who was actually six months pregnant,” she said. “So, we were all quite focused on making sure that she had enough space because the room was quite small.”

The two actresses figured the scene out themselves beforehand, with no coaching or rehearsals.

"I just could feel that Saoirse and I had the same ideas in terms of what we wanted to express in the scene," Winslet, 46, said.  "The emotional underpinning of the scene, the connection between these two women which is, of course, more important than anything in any love scene. We were on the same page in terms of that."

Will Ammonite be seen by many paying eyeballs at movie theaters?  Likely not, given that so many cinemas remain closed or capacity limited.  Last weekend’s top-grossing film, Liam Neeson’s Honest Thief, netted just over $2.3 million for a three-weekend total of $7.5 mil.

The October to December movie going season is always so busy, with award favorites and holiday heartwarmers competing with each other.  For now, that’s all changed.