Irish Post diaspora awards to be broadcast on Irish TV

November awards, in London, will reach global audience of one million – debut TV confirmed with TG4. 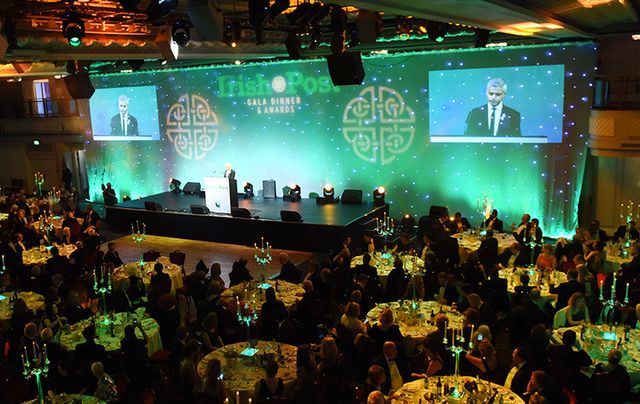 The Irish Post has signed an exclusive deal to broadcast this year’s Irish Post Awards live on television for the first time.

Irish public service broadcaster TG4 will screen the red-carpet Awards ceremony from London to homes across Ireland on November 23.

An estimated global audience of one million is expected for the live show on TV and online via social media channels.

Irish Post Owner and Publisher Elgin Loane said “We are very pleased to partner with TG4 to showcase the Irish abroad and connect a big diaspora event with mainstream live television in Ireland.”

TG4 Director General, Alan Esslemont, said: “The Irish diaspora, in Britain and worldwide, is an important and growing audience for TG4. We are very excited to extend our partnership to take on the role as broadcaster for The Irish Post Awards for the first time. It is a wonderful and unique opportunity to celebrate Irish life and achievement abroad.”

Featuring six Awards and four live music performances, the Awards show is being produced by The Irish Post through knowledge gained from its Irish TV acquisition.

More than 1,000 people will gather on London’s Park Lane for what is the 40th anniversary of The Irish Post Awards.

The Irish Post is an online Irish news site and the biggest-selling national newspaper for the Irish in Britain. The publication is at the heart of Britain’s 400,000 strong Irish-born community, the 2.4million second generation Irish with strong cultural ties to Ireland and half a million more around the world.

Next month’s television deal with TG4 follows the successful broadcast of The Irish Post Country Music Awards live from County Armagh in August.

The partnership comes after the acquisition of Irish TV by The Irish Post in April, a move approved by the Irish Government.

In February, The Irish Post purchased the digital and intellectual property assets of the diaspora broadcaster, after the company was wound up in December 2016 – less than three years after it was first launched in 2014.

Watch a live stream of the Irish Post 2016 awards here:

Welcome to the 2016 Irish Post Awards coming to you live from the Great Room at the Grosvenor House hotel on London’s Park Lane. Stay tuned for an amazing evening of Irish talent and entertainment as we honour the incredible achievements of Irish people in Britain. #irishpostawards The Irish Post

Posted by IrishCentral.com on Friday, 25 November 2016