Do you think the former Sports Illustrated Swimsuit model First Lady could be “the most glamorous since Jackie Kennedy”? 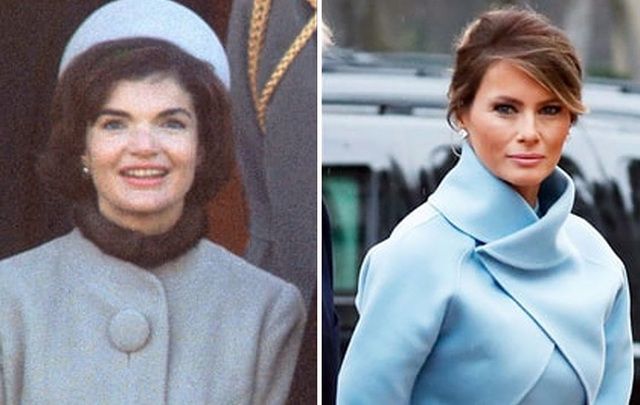 Top Irish designer Paul Costelloe has said the First Lady Melania Trump is “probably the most glamorous since Jackie Kennedy.”

The Dubliner, who was formerly the personal designer for Diana Princess of Wales, says President Donald Trump’s wife, a former Sports Illustrated Swimsuit model, is already having an impact on the fashion world.

Costelloe told Independent.ie “I think as a First Lady, Melania is probably the most glamorous since Jackie Kennedy. She will set trends as First Lady. She likes strong colors that work well.”

The straight-talking designer feels that the Slovenia-born First Lady has yet to put a foot wrong. Costelloe said, “For the inauguration, I liked the color of the Ralph Lauren number and I thought she looked comfortable in it.”

When the Trumps met the Obama's on the inauguration day! Melanie wears her stylish Ralph Lauren design.

At the inauguration Melania wore a sky-blue Ralph Lauren design – a high-necked sheath and matching bolero, in the same color. It seemed like she was channeling the style of Jacqueline Kennedy’s outfit from President John F Kennedy’s inauguration in 1961.

Jackie and John F Kennedy on their inauguration day in 1961.

Jackie has long been regarded as one of the United States’ most fashionable and iconic First Ladies in history One her most famous fashion moments was her Christian Dior evening gown, worn at a White House State Dinner in 1961.

Now, it seems that Mrs Melania Trump is making her own waves. Her look – elegant, structured and mono-chrome designs – is being favored by many celebrities.

At a recent press conference Mrs Trump wore an exclusive design from Karl Lagerfeld, the Creative Director for Chanel and Fendi. Commentators said her white cashmere pencil skirt and jacket was a nod to purity and neutrality.

The 71-year-old designer went on to say "I think she definitely has her own individual style.

“Melania isn't the slimmest person in the world, but she wears everything very well. She was a model so she has good posture. She's certainly Donald's trophy wife, and she behaves accordingly."

While Costelloe appears to be a fan of Melania it seems, that like her husband, she’s dividing opinion.

American designer Tom Ford has said “I was asked to dress her quite a few years ago and I declined. She's not necessarily my image."

Carolina Herrera was a little more flexible, saying that she predicts attitudes towards dressing the First Lady would change. She said, "In two or three months, they'll reach out. You'll see everyone dressing Melania."

Tommy Hilfiger for one wants to keep politics and fashion separate. He said, "I think Melania is a very beautiful woman and I think any designer should be proud to dress her.”