Seven Irish lads, a kitchen table. a glass of wine... this seven-part harmony from Coda will give you goosebumps! 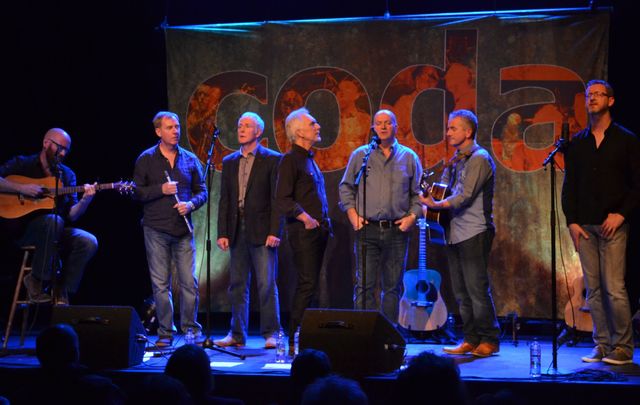 Coda's rendition of "Leave Her, Johnny, Leave Her" earned the Irish group new fans all around the world.

Some teachers, a doctor, and a marine biologist sit down around a kitchen table with a few glasses of wine on a Tuesday night to sing a few songs. You may not expect much, but the musical group Coda and their harmonies are enough to give you goosebumps.

Based out of Westport in Co Mayo, Coda is a group of seven male singers, brought together by their love of music to compose and perform their harmonies to some of the great Celtic and North American folk songs.

Meeting as members of Cór Mhaigh Eo, the group came together hoping to break from the classical choral singing they were involved with and began to work with folk, trad, blues, rock, and pop music to arrange new harmonies.

“We were all in the bass and tenor section and we sang Dúlaman arranged by Michael McGlynn which is for men only and we enjoyed it. Somebody said we should try to get together and now we meet up once a week in different houses,” group member Conall Ó Domhnaill told IrishCentral.

The group was enjoying gigging around Ireland earlier this year they were suddenly flung into the limelight when the most recent "Assassin’s Creed" video game came out. The game features the sea shanty “Leave Her, Johnny, Leave Her” in the soundtrack and fans searching for other versions of the song came across the Westport group’s own rendition.

In this video recorded in November 2011, the group performs a stirring a cappella version of the song in the intimate surroundings of a living room. What we wouldn't give to witness such talent in that kind of setting!

Since then, the video has gone viral and earned them many more fans all over the world.

Made up of Declan Askin, Alan Drumm, Conall Ó Domhnaill, Brian Lennon, Mike Cannon, Steve Bryant, and Leonard Kelly, the group said at the time that they meet once a week but long-term gigging is more difficult given their day jobs.

“We’d love to go to the States,” Conall added, “but with teachers and our other jobs the summer holidays are the only time.”

The group released their first album “mouthmusic” in November 2013, and they are currently in the process of putting together their second album. If the first one is anything to go by, this is just the start of great things for Coda.

For more information on the group or to look out for a gig near you, you can visit CodaSinging.com.