Irish American at center of Oscar error gets fired

Brian Cullinan, an accountant with PricewaterhouseCooper, will no longer be in charge of looking after the winners’ envelopes at the Academy Awards. 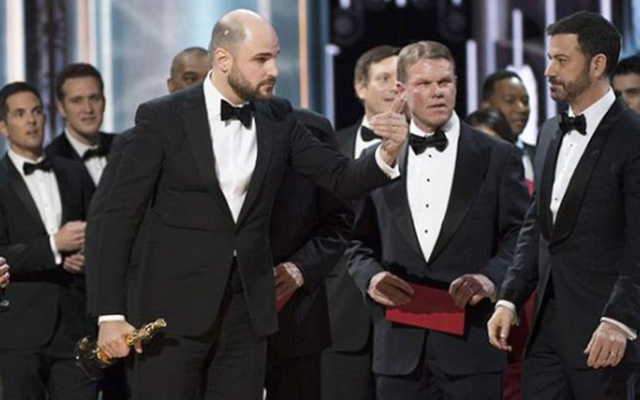 The Irish American accountant from PricewaterhouseCooper who caused the cringe-worthy Best Picture error at this year’s Academy Awards will no longer be responsible for handing out the winners cards at the Oscars ceremony.

Brian Cullinan, PwC’s US Board Chairman, mistakenly gave Best Picture hosts Warren Beatty and Faye Dunaway the spare card for Best Actress instead of the two he held for Best Picture causing “La La Land” to be initially named as the winner only for “Moonlight” to snatch it from the celebrating cast when they were already making their winning speeches.

A spokesperson for the Academy has stated that neither Cullinan nor Martha Ruiz, the second representative from PwC, will be handing out the envelopes in future ceremonies after the first announcement gaffe in the 83-year history of PwC’s involvement with the Oscars.

Hosts Beatty and Dunaway received the first blame for the mistake as confusion took over the ceremony. As the cast of crew of “La La Land” made their thank yous, Cullinan and Ruiz entered the stage with Cullinan holding onto the two Best Picture envelopes in his hand, one of which should have been given to Beatty.

Realizing the error, the show’s producer Jordan Horowitz snatched the correct envelope and announced the correct winner to the stunned audience while Beatty explained that he read Emma Stone “La La Land” from the card he was given leading them to make the “La La Land” Best Picture announcement.

"I want to tell you what happened I opened the envelope and it said Emma Stone, La La Land and that is why I took such a long look at Faye and at you,” Beatty said.

"I wasn't trying to be funny. This is Moonlight for best picture."

Read more: The Irish American who blew up the Oscars

Following the event, however, actress Emma Stone stated she had her winning envelope for the Best Actress Oscar she had picked up just minutes before in her hand the whole time, leading some to question Beatty’s explanation.

The actor, himself nominated for 14 Academy Awards over a glistening career, was correct, however, and the backup envelope for Best Actress had been given to him before his went on stage.

Although told not to tweet or use his phone while working backstage, Cullinan posted a picture on Twitter of Emma Stone with her Oscar just minutes before the mix-up and has been accused of spending time on his phone instead of ensuring the correct envelopes made it on stage.

The error has now lost him and Ruiz their prized position backstage, however, as the guardians of the Oscar winners. Every year to ensure no leaks are made ahead of the awards ceremony, two accountants from PwC are tasked with counting the ballots and bring the results to the Oscars, a tradition that has been carried out for over eight decades.

Such is the secrecy surrounding the winners that both accountants are given two envelopes for each category and set out for the ceremony taking different routes with a police escort to ensure that at least one will always arrive on time.

“In 83 years that we’ve been doing this, I’m the 13th partner and Martha is the 14th. So we haven’t had that many people have this role in 83 years. And this is the 89th Academy Awards, so you can see PwC has been doing this almost since the beginning,” Cullinan told MarketWatch last week just before his fourth and last Oscars.

The now deleted tweet from Cullinan posted moments before his error.

“We sincerely apologize to Moonlight, La La Land, Warren Beatty, Faye Dunaway and Oscar viewers for the error that was made during the award announcement for Best Picture,” PwC said after the event.

“The presenters had mistakenly been given the wrong category envelope and when discovered, was immediately corrected. We are currently investigating how this could have happened, and deeply regret that this occurred.

"We appreciate the grace with which the nominees, the Academy, ABC and Jimmy Kimmel handled the situation."

“The two accountants responsible for the best picture mistake will not work the Oscars again,” said the film academy president.

“They have one job to do. One job to do! Obviously, there was a distraction.”

No decision has yet been announced on whether PwC will continue to count the Oscar ballots.