First look trailer for the upcoming Star Wars – The Last Jedi has just been released, featuring Luke and Rey on Skellig Michael. 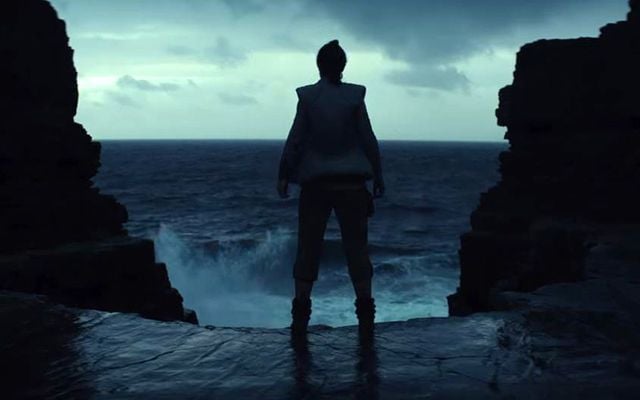 First look trailer for the upcoming Star Wars – The Last Jedi has just been released, featuring Luke and Rey on Skellig Michael. Lucasfilm

The first trailer for the next Star Wars film, The Last Jedi, has just been released today, and Ireland is looking stunning if we do say so ourselves.

Just as 2015’s Star Wars: The Force Awakens concluded with Rey finding Luke Skywalker on an isolated planet (really the famous monastic island Skellig Michael in Co. Kerry), the trailer for The Last Jedi opens with aerial views of the rocky Skellig Michael, as we zoom in to learn what Luke has been teaching Rey.

Co. Kerry locals were delighted when they found out The Force Awakens would be shooting on the uninhabited island back in 2014. Then, the director of Episode VIII: The Last Jedi, Rian Johnson, returned to Skellig Michael with his cast in September 2015, picking up the story from the iconic moment in Episode VII, when Rey found Luke Skywalker on the stony steps of Skellig Michael. The location scouts were so taken with the Wild Atlantic Way that they came back for a second shoot in May 2016. Locations along the western seaboard of Ireland, particularly in Donegal, were handpicked to represent the planet Ahch-to in Episode VIII – due to hit the big screen on December 15, 2017.

According to a Tourism Ireland briefing, the cast and crew so enjoyed their time in Ireland that when the Irish shoot wrapped, Lucasfilm took out no fewer than eight ‘thank you’ ads in local newspapers in the West of Ireland, saying the cast and crew were“captivated by the Wild Atlantic Way and their journey to Ireland”. Mark Hamill also tweeted: “How I will miss IRELAND. Its beauty, its people, its … snackfood” (in a reference to Tayto crisps!).

The trailer was released today at the 2017 edition of Star Wars Celebration in Orlando, Florida, the annual fan convention described as the ‘ultimate fan experience’, which attracts Star Wars devotees from around the world.

In addition to being massively excited about the new film, Star Wars fans are also mourning the loss of Carrie Fisher, who reprises her role as Princess Leia. Fisher died in December of a heart attack on a flight back to Los Angeles from London. She had wrapped shooting for The Last Jedi.

Read More: Carrie Fisher was proud of her Irish roots

Will you be seeing Star Wars: The Last Jedi when it opens in December 2015? Let us know what you think of the trailer in the comment section.