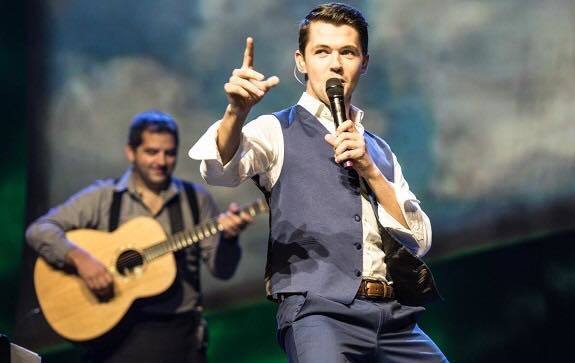 When child star Damian McGinty joined Celtic Thunder at the tender age of 14, he was the youngest member of the group. Eight years on, and still just 22 years of age, he made his spectacular return to the singing sensation for “The Very Best of Celtic Thunder” tour in 2015.

Speaking to the Boston Herald, Co, Derry native McGinty said on his return, “I’ve come back five or six years later with a lot more experience, and I’m still the youngest in the group.”

McGinty returned to the group following a five-year break which saw him take to L.A. and break on to TV through the hit show “Glee”. At just 18, he crooned his way to the joint-first place in the first season of “The Glee Project,” a talent show searching for the next stars to join the “Glee” cast.

McGinty’s success saw him land a recurring role in the third season and part of the fourth season of the FOX show, playing an Irish foreign exchange student, Rory Flanagan.

He told the Herald, “I look back on it very fondly. I was going in at 18 years old. Even though I was with Celtic Thunder for four years, I was very young. I’m still young now. I went out to Los Angeles myself. I was looking at everything with my eyes wide open. I was very innocent and pretty naive about it all.”

Winning his first music competition at just six years old, Damian McGinty cites big band and swing as his influences. He received his first big break at just 13 when he recorded a charity CD, which was brought to the attention of Celtic Thunder's producer Sharon Browne and music director Phil Coulter. Seeing something special in McGinty, they asked him to audition for their new show and he was immediately cast as the boy wonder/teenager.

Although a member of Celtic Thunder for four years while a teenager, McGinty returned home to Derry and attended school between tours. It was through “Glee” that he moved to L.A., where he has spent the past four years, and where he plans to stay to continue his work in music and acting. The worldwide smash “Glee” came to a close in 2015 but due to scheduling conflicts, McGinty was unable to take part in the show’s two-hour finale featuring all previous Glee members.

While in L.A., McGinty also worked on a solo album and sought to improve his acting skills, taking speech lessons to perfect his American accent. The music on his solo album will differ from the theme of Celtic Thunder and will be different to his previous work. He says, “There is a Coldplay vibe, Sam Smith vibe to it.”

Celtic Thunder will be enjoying a 10th anniversary holiday cruise in November 2017.