The Dublin MMA champ, Conor McGregor is the cover star of British GQ. You'll never guess who is style icon is! 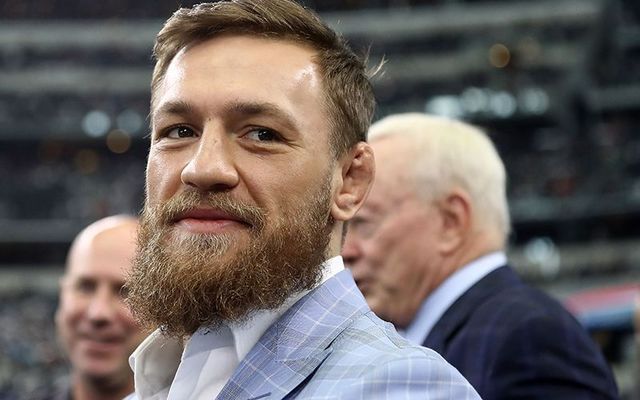 GQ star Conor McGregor! Who doesn't love a man in a suit. Getty

The Dublin MMA champ, Conor McGregor is the cover star of British GQ. You'll never guess who is style icon is!

Conor McGregor ever fight again?  He says yes, but there’s no question that his booming business outside the ring is consuming a bunch of his time.

Conor landed the cover of the September issue of British GQ, and he spoke about his love of bespoke fashion.  He’s got his own high-end clothing line, August McGregor, and he says he’s involved in every facet of production.

“I’m very obsessed with the material, how things feel. This is everything for me. I'm very involved in this process. I want to be in the store all day, so I can watch people come in and chat with them. It’s what I’m passionate about,” Conor said.

He also revealed that he’s taken lots of inspiration from retired footballer David Beckham, who’s built a potent brand for himself away from the pitch with his Spice Girl wife Victoria.

Bond is dead baby meet me at the spot. @mcgregorproductions

“For me, the OG of fashion and male style is David Beckham. David Beckham was a pioneer. He paved the way for that kind of style. I actually talked to David; he sent me some clothes. They’re in my office right now as we speak,” he said.

“We have to go to David for inspiration, who I’d look up to style-wise, back in the day. But, really, my icons in style would be my mother and my father, who inspired me.”

Indeed, mom Margaret and dad Tony come in for high praise from their famous son.  Looking like a million bucks was always important in the McGregor household, even though they didn’t have anything like that kind of money before Conor hit the big time.

Along with this cracking Steel Blue 3 piece suit from our collection, make sure and check out the new range of “AM” ties also available. Go ahead, Zoom in on it. What a tremendous range we have now. The full extensive! I am so proud of this work, and so proud of all our team, as now our hard work and effort is being recognized. We are not playing here. This is big business now. Our line is not like the others. In reality, it is like nothing this game has ever seen before! This is high end fashion baby, and we run it now. I know you feel it. I know you feel it, because I feel it. August McGregor baby @augustmcgregor

“My love for fashion and style came from my mother, my father, and my family. Where we come from, we always took pride in the fact that we took care of ourselves and had fresh clothing,” he says.

His first big UFC paycheck was divided up in a few ways.

“The first thing I did, I took a big chunk of cash out of it out and I gave it to my mother. The second thing was going to a tailor in Dublin city center. My father, growing up, had always said, ‘You know you're successful when you’ve got a fully tailored suit.’ That stuck in my head for so many years…I wanted a fully custom-made, tailored suit on my skin, that feeling of success.”

What do you think is Conor McGregor a new style icon? Would you like to see him fighting again? Let us know in the comments section below.