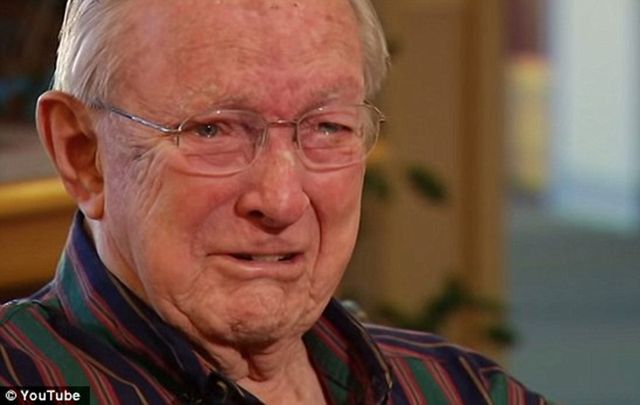 A World War II veteran from Aurora, Colorado, had an emotional reunion in November 2015 with a letter he wrote his “darling, alluring” wife 70 years earlier. The love letter was discovered by a stranger in a record sleeve purchased at a thrift shop.

Bill Moore, now over 90 years old, wrote the letter on December 29, 1944, while stationed in Europe during the Second World War. Earlier this year ABC News filmed him reading the letter he wrote when he was 20 years old.

He wrote the letter to his “lovable” and “alluring” future wife, Bernadean Gibson, and called himself the “luckiest guy alive.”

“My darling, lovable, alluring Bernadean. I ran out of space, but I could have written a lot more adjectives describing you. You are so lovely, darling, that I often wonder how it is possible that you are mine.... I’m really the luckiest guy in the world, you know, and you are the reason. Even your name sounds lovely to me.”

The veteran laughs saying, “It gets worse," by which he means sweeter.

Moore talks about how much these letters meant to the couples as they were never 100 percent that they would ever see each other again.

Thankfully Bill and Bernadean had a long life together, had three children and lived a happy life, until her death in 2010.

Melinda Gale, Moore’s daughter told ABC that her mother had saved all of his letters, but somehow they had been lost over the years. The family are delighted to have one of the originals.

She said, “I read it for my daughter last night. It really hit me that we were seeing the true depth of my parents' love that, as children, we knew was there, but you don’t hear it. Their love sets such a beautiful example of what life can be.”