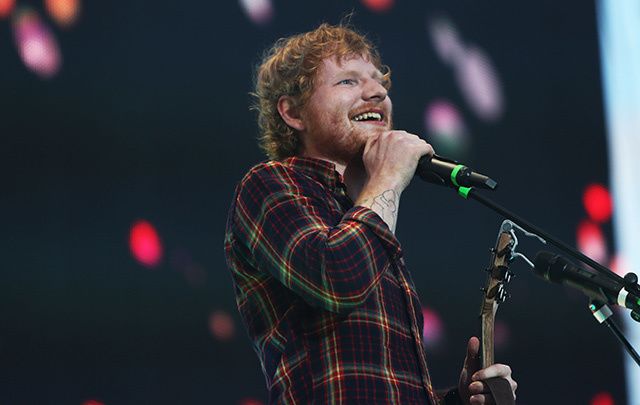 Releasing the track listing for his emerald-tinged third studio album “÷ [Divide]” on Wednesday, Sheeran had a very special shout-out to the county on Ireland’s west coast, after earlier revealing that this album would have some very strong Irish elements.

After a year-long hiatus, the musician began his comeback last week with the release of two new songs from the album, but it is the tracks about Galway and his family’s homeplace in Wexford that Irish fans are dying to hear when the album makes its full release, rather appropriately, in the month of March.

Sheeran described the tunes as “full-on Irish trad songs,” and he teamed up with Belfast-based band Beoga for the song “Galway Girl,” which he has claimed will be “the song” for the Irish.

“I’ve actually got a song on the new album which I think is really gonna explode in Ireland,” the pop star told "The Eoghan McDermott Show" on RTÉ’s 2fm.

"It would be something to do with the county of Galway. I’ve got a trad band called Beoga, they’re actually from Belfast. It’s a fiddle, a pipe, a bodhrán, and piano and we really jam.

“It’s gonna be really good, but I think I will never be able to play another song in Ireland again because that one will just be the song.”

While Sheeran released the name of the songs on his album via his Instagram account earlier in the week, the Belfast folk band who helped him out are keeping their lips sealed about the songs’ content and lyrics.

"We did two songs with Ed, but I can’t tell you any more! I’m sworn to secrecy! That’s all I can say,” Niamh Dunne, the Limerick-born fiddle player and vocalist with Beoga, told RTÉ.

Sheeran is also said to be hiring Irish dancers to feature in an upcoming music video which we can only speculate is for one of these all-trad tracks featured on “÷ [Divide].” Hopefully “Galway Girl” will be among those that the singer releases before the full official release of the album later this year, while the song about Wexford is set to feature as a bonus track.

“I should be over in Ireland soon so I’ll probably put something out then,” the 25-year old stated.

“I’m definitely shooting a video for one of the songs in Ireland and I will be doing a casting because I need proper céilí dancers.”

Sheeran’s paternal grandparents are Irish and the singer has always embraced his Irish roots. And really, is there any point in him denying them? With that flock of red hair there could never be any doubting where the award-winning minstrel’s family came from.

Sheeran Frequently visits Ireland for family events – he famously stayed with his grandmother Anne in Wexford before his sold-out shows in Croke Park, Dublin, in July 2015. He's also said to have spent some time busking in Galway, which may be the reason for its inclusion on this album.

Such is Sheeran’s love for his grandparents' homeland that he even recorded an Irish-language version of his hit “Thinking Out Loud,” adding to the brownie points he won among Irish speakers for his tattoo reading, “nuair is gá dom fháil bhaile, is tú mo réalt eolais” (“when I need to get home, you’re my guiding light”).

His songs have also been covered by Coláiste Lurgan to much success.

Here’s hoping Ed can introduce a whole new group of people to just how great Irish traditional music is!