Ireland’s finest musicians will gather for a once in a lifetime celebration of the life and music of John Sheahan on St. Patrick's Day live on TG4. 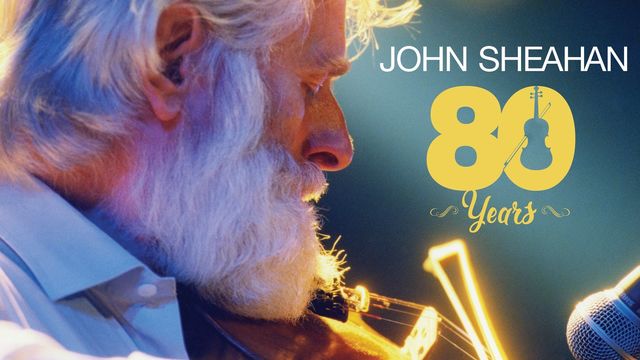 Ireland’s finest musicians will gather for a once in a lifetime celebration of the life and music of John Sheahan on St. Patrick's Day live on TG4.

John Sheahan has been described as a music icon, a living legend and a national treasure. His contribution to Irish music and Irish culture spans a phenomenal seven decades, including 50 years with a legendary folk group, The Dubliners. During a unique career, John has played with the best singers and musicians on the planet, entertaining audiences of millions throughout the world.

To mark his 80th birthday, John performed a very special concert in Vicar St. accompanied by a host of Ireland’s finest singers, songwriters, and musicians. John brought the audience, including guests of honor President of Ireland, Michael D. Higgins, on a magical musical journey filled with songs, music, stories, and craic.  This special concert will be broadcast on TG4 St.Patrick's Day at 9:30pm GMT and can be viewed anywhere in the world via TG4's player at www.TG4.ie.

Throughout the evening John was joined on stage by an array of musical guests who performed their own hit songs as well as some of Dubliner’s classics, including Raglan Road and The Auld Triangle.

Special guest musicians included Oscar-winning singer-songwriter, Glen Hansard, Ralph McTell, writer of such instant classics as “The Streets of London” and “From Clare to here”, and Dublin singer-songwriter Declan O’Rourke, who performed his hit single “Galileo”.

Imelda May even made a surprise appearance on stage presenting John with a special birthday cake, before leading an impromptu rendition of ‘Dublin in the Rare Ould Times’ with audience and musicians in full voice.

Throughout the night John was accompanied by world-class musicians including saxophonist Richie Buckley, jazz guitarist Drazen Derek, classical guitarist Michael Howard, violinists Colm Mac Con Iomaire, accordionist Danny O’Mahony and conductor and concert pianist Gavin Murphy. Members of John’s own family also took to the stage for some of John’s own compositions including the Marino Waltz.

This was a once in a lifetime musical celebration that saw an eclectic gathering of musicians and songwriters share the stage to celebrate the life, music, and poetry of one of Ireland’s best known and loved musicians, John Sheahan, as the Dubliner entered his 7th decade of music-making.

A concert not to be missed on TG4, St. Patrick's Day at 9:30pm and can be viewed worldwide live at www.TG4.ie.