County Louth town will play host to the world’s largest celebration of Irish music, song and dance this August. 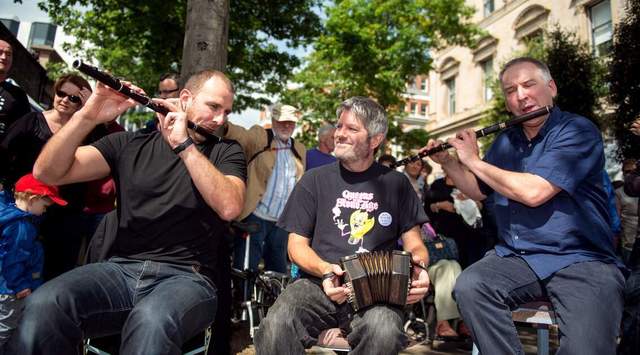 County Louth town will play host to the world’s largest celebration of Irish music, song and dance this August.

Fleadh Cheoil na hÉireann 2018 is the largest celebration of Irish music, song and dance in the world and its coming to Drogheda, County Louth. This year’s Fleadh, which is sponsored by the Credit Union, will be held from 12th – 19th of August and boasts some of the country’s most talented musicians, singers and dancers including Martin Hayes and Denis Cahill, Zoë Conway, Damien Dempsey, Pádraigín Ni Uallacháin, Sibéal Davitt and Gerry O’Connor.

The County Louth town of Drogheda will play host to the world’s largest celebration of Irish music, song and dance this August with the Fleadh Cheoil!

This year’s line-up has been described as one of the most exciting to date, with an array of artists of local, national and international significance including the Hot House Flowers, Julie Fowlis, Frankie Gavin, Odhrán Ó Casaide, Mairead and Triona Ni Dhomhnall, Andy Irvine and Donal Lunny, Moya Brennan & Cormac De Barra, Ulaid, The Voice Squad and Sibéal Ní Chasaide. Completing the line-up are Kieran Hanrahan, this year’s recipient of the third The Flanagan Brothers Award, Michael Holohan, Mick O’Brien & Family, banjo player Stevie Dunne, the RTÉ Contempo Quartlet and the RTÉ Concert Orchestra in a program that also celebrates Irish traditional music song and dance and its importance through families and the inter-generational exchange that takes place.

Commenting on Fleadh Cheoil na hÉireann, Dr Labhrás Ó’ Murchú, Ardstiúrthóir Comhaltas Ceoltóiri Éireann said: “Fleadh Cheoil na hÉireann is now the largest and most unique cultural festival in the world. Its significance is cultural, economic and social and it is a tribute to all those who kept our cultural traditions alive down through the decades. Drogheda is an ideal venue for this celebration of whom we are as a people.”

People are also invited to take part in various other activities surrounding the Fleadh, including the incredibly popular Scoil Éigse, which offers people of all ages the opportunity to participate in workshops and traditional music sessions to gain a deeper understanding and appreciation of Irish music. It is estimated that approximately 900 musicians will attend Scoil Éigse workshops in Drogheda this August.

This year’s Fleadh offers an extensive youth program that aims to increase student’s awareness of Irish culture and tradition and encourage them to become actively involved in the celebrations for Fleadh Cheoil na hÉireann. The school children of Drogheda and the surrounding region are leading the charge when it comes to participation and initiative, by taking part in musical events and arts and crafts programs with their local communities.

Whether attending for one day or the entire week, Drogheda and County Louth as a whole offer a wealth of attractions and the warmest of welcomes to visitors this August.

Tickets are now available to purchase for Fleadh Cheoil na hÉireann 2018 and the line-up of events and performances, which will take place every day from Sunday 12th through to Sunday 19th August 2018, is available to view at www.fleadhcheoil.ie.