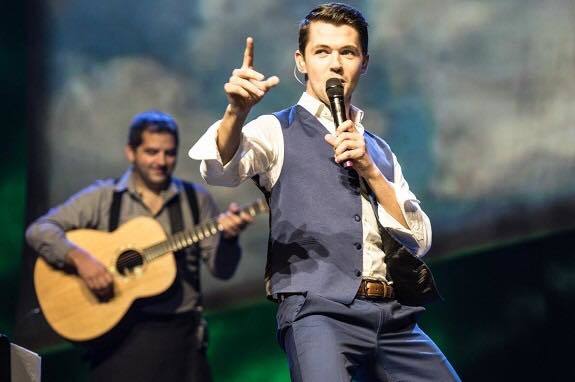 Ever since he embarked on a musical career at the tender age of 14, Derry lad and former "Glee" star Damian McGinty has always worked as part of an ensemble. Firstly, he toured for several years with Irish group Celtic Thunder before landing a coveted role in hit television program "Glee," appearing as Irish exchange student Rory Flanagan for 17 episodes.

Back in 2014, the Los Angeles-based singer was preparing to take to the road with a new stage show, "The Power of Music," playing around 80 dates across the US. Still just 21-years-old, McGinty spoke to IrishCentral about also gearing up to go it alone for the first time. Later that year, he planned to release his debut solo album and to tour on his own. It's a nerve-wracking prospect for young McGinty, but one which he said he is looking forward to.

“I’ll be going out on my own, which is very exciting,” he says. “I’ve always worked with companies, Celtic Thunder, Glee, The Power of Music and now I’m ready to be me, to be Damian McGinty and see where that takes me.

“I’ve been working with a lot of writers and producers, coming up with different sounds. My style’s not going to be too far away from the likes of Josh Groban or Michael Bublé but we’ll be keeping it young and fresh.”

In the meantime, he's busy promoting his new single, "Let The River Run," a collaboration with Derry's Mairead Carlin. The song, a cover of Carly Simon's Oscar-winning single, is available on iTunes and made waves back home in Derry when it was released three years ago. It was even used as the official anthem for its City of Culture year.

Produced by Frank Gallagher, the song was debuted by the McGinty and Carlin at the huge Sons and Daughters concert in their native city in January 2014. It was well received by the audience – but the cover also impressed Carly Simon herself. The legendary singer was so touched by their melodic version, she offered to release it as a single through her record company Iris Records in a joint venture with McGinty’s own company, Walled City records.

And, in a move that stunned McGinty and Carlin, she invited the pair to perform with her on stage at a star-studded charity event in Beverley Hills that October.

Describing the experience as "one of those pinch-me moments," McGinty said Simon cried when she first heard the cover.

“When we heard Carly’s reaction we couldn’t quite believe it,” he said. “Lots of singers cover songs and 99% of the time, you’re never going to hear from the artist because there are so many people that do their songs.

“But this particular version reached Carly and the response she gave was incredible. Then we were invited along to a gala event in Beverley Hills to perform with her and Natasha Bedingfield so we ended up on stage with her, singing the song. It was very surreal but very rewarding.

“It’s not the type of thing that happens every day. There were people like Hilary Clinton and Jane Fonda there. It was a very prestigious event and we were so lucky and proud to be part of it.”

McGinty, who moved to Los Angeles after winning "The Glee Project" alongside fellow contestant Samuel Larsen, admits he still gets homesick for Ireland from time to time, particularly since his sister gave birth to his first nephew, Noah.

But he says he knows he is blessed to be in the position he's in.

"It's difficult, you know," he says. "Anyone who says that it's never hard being away from home is lying. Sometimes it does get to me. I've been living here for three years now and in a sense, I'm used to being away from home but I still miss my family and friends, Derry and Ireland.

"But I can't complain. This is where my path has taken me and I'm lucky to be doing something I love. Plus I make a point of getting back to Derry every year and my parents come out here to see me, so that makes it easier.

"I was just home at Christmas and it was lovely, especially having Noah around. He's such a ball of energy and a real wee bundle of joy. It made Christmas all the more special for us."

McGinty has recently been joined in Los Angeles by his best pal from Derry, Oran O'Carroll. His former school friend and business partner just started an internship at a Beverley Hills management company and McGinty says such a close tie to his beloved city helps ease the homesickness.

"Walled City Records is just Derry-based at the moment but we're thinking of spreading it out to the States as well," he says. "It's great having Oran here. We grew up together, went to school together, in the same class and now, at 21, we're both out here in Los Angeles. It's very strange to think how our paths are going the same way."

He also keeps in close contact with "Glee" co-star Samuel Larsen, whom he describes as a good pal.

"We work on a bit of music together or go see a gig together," he says. "I see some of the others now and again, but it's more of a professional relationship."

During his time on "Glee," McGinty was befriended by the late actor Cory Monteith, who played Finn Hudson in the show. Monteith’s body was found in a Vancouver hotel room in July 2013. He had died from a drugs overdose.

McGinty said his death came as a huge shock and that he still thought about the actor.

“I worked with Cory for 18 months,” he said. “My first two or three scenes on 'Glee' were with him, literally just me and him.

“He took me under his wing and was very polite and welcoming. He was understanding as to how difficult it was for me to walk into Hollywood, as this wee kid from Ireland, and go onto one of the biggest shows on television ever.

“I can’t say enough good things about Cory. He had a huge heart and was the big brother on the set, looking out for everybody.

“Even thinking about it now makes me so sad. He was taken away too soon."

Acting is something he says he won't rule out again but for the time being, he is happy to concentrate on his music.

"I've been plugging away on the odd television show, so we'll see what happens there," he says. "Music is certainly the focus for me. Of course, it would be silly after the experience I gained on 'Glee,' to throw it all away, but I'm not as passionate about acting as I am about music. Still, it's something I'd like to pursue in the future. It's just that right now, it definitely plays second fiddle to my music."