20,000 Irish fans will be there on Saturday, Aug 26, to cheer on The Notorious in his first boxing match, against champ Floyd Mayweather. 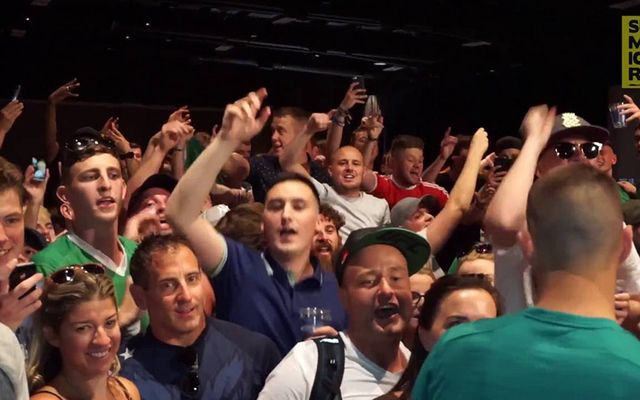 20,000 Irish fans will be there on Saturday to cheer on The Notorious as he fights boxing champ Floyd Mayweather

Up to 20,000 Irish fans, many based in Britain and the U.S., are on their way to Las Vegas for the mega-fight on Saturday night (5 a.m. Irish time on Sunday) between UFC champion Conor McGregor and boxing legend Floyd Mayweather Jr.

Despite many Irish disliking 29-year-old McGregor’s sport, excitement is still at fever-pitch nationwide for his boxing match against 40-year-old Mayweather, a former world boxing champ at five weights from super featherweight to light middleweight.

As the rush to Vegas started Tuesday, many fans are traveling despite not being able to afford tickets initially released at between €430 and €8,582 and now currently being priced at between €1,106 and €85,325. (Reports indicate that ticket sales haven’t been as brisk as first anticipated, and that seats, albeit high priced, are still available.)

Irish fans are confident in The Nortorious, Conor McGregor's abilities.

Partying fans supporting McGregor, known as The Notorious, aim to create a carnival atmosphere while watching the fight live on giant television screens in an official fan zone for the Irish at the Artisan Hotel in Las Vegas.

Those with actual tickets for the bout in the T Mobile Arena at the MGM Grand Hotel are in for a memorable weekend.

One spokesman at the MGM said, “We are expecting over 20,000 Irish here for the McGregor fight. It’s going to be crazy, which is saying something in a place like this.”

One fan traveling with fares paid by McGregor is Dubliner Mick Konstantin.

Konstantin, who writes a song for his friends every year, this year did one on McGregor.

He posted on Facebook, “Tried to get as many of his famous lines in as possible, so hope ye like it!  And if anyone out there knows Conor personally, feel free to pass the song on to him, sound!”

It was passed on and McGregor loved it so much that he is flying Konstantin and a pal to the fight. McGregor said, “It’s a very catchy song. What a song, it’s the journey in music form.”

He is also flying another two supporters on his own private jet which has been nicknamed Notorious Airways.

Lee Hammond, an up-and-coming amateur fighter, and Sergey Pikulskiy, a wrestling coach, are both members of McGregor's Straight Blast Gym in Dublin.

The two of them thought they were at the gym to record good luck messages for McGregor with his new sponsor, Betsafe. Instead, once they had been filmed giving their support, they were shown a clip which contained a message from McGregor inviting them to fly to the fight on his personal jet.

The $700 million fight (including arena tickets and pay-per-view fees) will make the battlers among the richest men in sport.   Although Mayweather is the favorite, Irish bookies have had a flood of bets on McGregor at odds of four to one. One punter bet €3,500 on McGregor.

Boylesports spokesperson Aoife Heffron said, “It remains clear that Irish punters have every faith in The Notorious.”