Conor McGregor made a tongue-in-cheek suggestion that he was prepared to buy Manchester United from the club's hugely unpopular US billionaire owners this week. 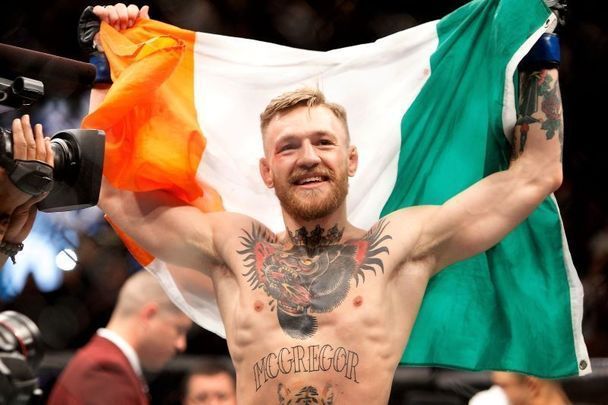 McGregor took to Twitter on Tuesday following a rollercoaster 48 hours in European soccer that saw Manchester United and 11 other European powerhouses threatened to break away from traditional competitions and form the highly controversial and unpopular European Super League.

Funded by a huge $4.2 billion investment from JP Morgan, the so-called "dirty dozen" reportedly stood to make more than $400 million every year, creating a financial chasm between them and the clubs not fortunate enough to be deemed part of the Super League and putting the future of European soccer in jeopardy.

The plans were canned on Tuesday following immense pressure from UEFA, European soccer's governing body, and the football associations of Spain, Italy, and England, who all threatened to kick the clubs out of their respective competitions. British Prime Minister Boris Johnson also pledged to "drop a legislative bomb" on the proposals.

Plans for the Super League were also subjected to widespread blowback and protests throughout Europe, with many Manchester United supporters now calling for the Glazers - the club's hugely unpopular American billionaire owners - to sell the club.

Co-Chairmen Joel and Avram Glazer, who also own the Tampa Bay Buccaneers, have been hugely unpopular in Manchester since their leveraged takeover in 2005, which plunged the club into more than $900 million of debt.

The Glazer brothers have been running the club since their father Malcolm died in 2014 and their unpopularity soared to hitherto unseen levels when they attempted to form the European Super League, threatening the club's long-standing position in English football.

Responding to the widespread criticism of the Glazers, McGregor hinted that he was ready to launch a bid for the prestigious club.

"Hey guys, I’m thinking about buying Manchester United! What do you think?" he wrote in a tweet that has been liked more than 410,000 times.

Hey guys, I’m thinking about buying Manchester United!
What do you think?

The message was almost certainly tongue-in-cheek. The Notorious is reportedly worth an enviable $250 million at present thanks to his illustrious fighting career and his successful venture into the whiskey market.

However, Manchester United is currently worth an estimated $3.8 billion and is the tenth-most valuable sporting institution in the world behind a handful of soccer, baseball, and American football teams, according to Forbes.

It seems incredibly unlikely that McGregor will be able to stump up the vast fortune required to buy the club and he will certainly have to shelve any plans of owning the club for now.

Instead, McGregor must focus on his upcoming fight with Dustin Poirier in Las Vegas in July.

Thank you Sir, I absolutely love it!
I’m as hungry as I’ve ever been!
If not even more hungry!!
Honoured to be in the position to entertain my fans! I do not take it for granted!
July 10th is ours! https://t.co/Lt0yDGr1UW