“Coming Home” by Cathal Kenna showcases the stories of five sets of Irish emigrants either leaving or returning to Ireland. 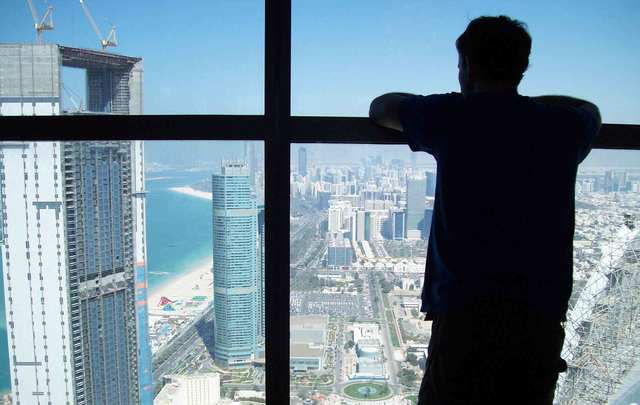 Gerard Ward is one of the Irish immigrants documented in "Coming Home." He now lives in the Middle East. Cathal Kenna

“Coming Home”, an Irish emigration documentary by Cathal Kenna, tells a fascinating tale of the Irish journey back home.

Much has been written and produced on the subject of Irish immigration and the endless tales of those who leave Irish shores to establish a new life in a foreign land. Yet, what of those who return, be it after just a few years abroad or a complete lifetime later?

Irish filmmaker Cathal Kenna lived through two periods in Ireland where mass emigration saw many family and friends leave their homeland and while never emigrating himself, he was forever fascinated by the stories of these people who either make their move a permanent life choice or always plan to return to Ireland one day.

Produced by Clann Films, “Coming Home” was Kenna’s debut feature documentary chronicling the journeys of five Irish emigrant families, living across four continents, who share the one dream of eventually returning to the Emerald Isle where they will live out their remaining days, however plentiful they may be.

Previously shown in various Irish centers across the US, Kenna will be returning to the Irish Arts Center in New York this Wednesday, October 25, for a screening and talk about this, his stellar debut documentary.

“It's a huge honor to screen 'Coming Home' in New York both for me and my family,” Kenna told IrishCentral of the screening.

“I'm extremely grateful to all of the staff at the NYC Irish Arts Center for making this happen and in particular, to Gabriel Byrne for championing the film. I love the city of New York and it's people.

Clare Waldron is one of the Irish immigrants documented in "Coming Home." Image: Cathal Kenna.

“New York and the Irish retain a deep historical bond, with the City acting as a gateway for so many attempting to access a land of hope and opportunity. It makes the New York screening all the more special as a result.”

“Coming Home” traces the personal journeys of Clare Waldron, Gerard Ward, Vera Finnegan, Tom and Evelyn O’Brien, and Jimmy Hayes and Mary Lloyd, from their initial departure from Ireland and the reasons behind this, to their difficulties in living an expat life.

Difficulties with homesickness are summed up beautifully within the documentary with a song written by the father of emigrant Vera Finegan, who lived in Australia. Her father, unfortunately, died three years after she made her move but she still remembers word for word the song he sent to her just weeks after she arrived Downunder, telling of her return to Ireland.

“Each cast member’s sense of home was wrapped up in their own personal memories and experiences of Ireland which were obviously unique,” Kenna explains.

“But underneath that layer they generally shared a common sense of home placing value on family and friends, the landscape and nature, the Irish sense of humor and a general sense of being at ease among their own people.”

Throughout the thrill of their new homes and the difficulties of living away from their families, however, the thread that ties these five different life experiences together is the desire to return to Ireland and the romantic vision of Ireland that comes with living away from home, for better or for worse.

“There were a few surprises in the returnees experiences of Ireland,” Kenna told IrishCentral before a previous New York screening of the documentary.

“Some were fairytale-esque while others were left bitterly disappointed.”

“‘Coming Home’ takes the viewer on an emotional journey with the returning emigrants throwing up a few surprise twists and turns along the way. They invite us into some of the most personal and touching moments of their lives leaving us rooting for a satisfactory outcome for them on their return. Some experience fairy tale endings while others are left bitterly disappointed at the reality of what they find back home,” Kenna continued.

Jimmy Hayes and Mary Lloyd are some of the Irish immigrants documented in "Coming Home." Image: Cathal Kenna.

“The impact of the passing of time and the distance from home felt by the emigrants plays out on their dreams and memories of home leaving a bitter sweet aftertaste for some of the film's subjects. ‘Coming Home’ is a love letter to a romantic ideal held of Ireland but more importantly to the special people connected to the island.”

And despite the supposed rebirth in the Irish economy, Kenna believes that the story of Irish emigration, a story that has dominated our history for so many years, is one that will remain with us for some time to come.

Vera Finnegan is one of the Irish immigrants documented in "Coming Home." Image: Cathal Kenna.

“There is much reporting of economic recovery in Ireland but anecdotally I've encountered some who have returned and found it very difficult,” Kenna states.

“The uncertainty around the impact of Brexit adds another layer of complexity. My gut feeling is the majority of those who left Ireland post 2008 will not return to live in Ireland.”

Responsible for the sound, camera, editing and direction of the documentary, Kenna also established Clan Films in 2016 to distribute his debut feature.

Gerard Ward is one of the Irish immigrants documented in "Coming Home." Image: Cathal Kenna.

Have you seen "Coming Home" in a previous US screening? Let us know your thoughts on the documentary in the comments section, below.