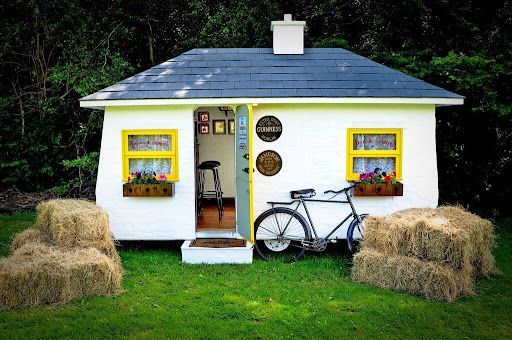 A cabinet maker from Galway has converted an old caravan into a traditional Irish pub.

The Shebeen comes complete with wooden floors, faux-brick walls and Irish memorabilia. The bar on wheels has space for two draught beers and seats 10.

John Walsh, who runs Clinical Cabinets which designs and makes laboratory, healthcare and workspace furniture, says he came up with the idea as a Friday-afternoon wind-down for his staff.

“It started off as a team-building exercise with my guys, but then, as we were getting clients in, everyone seemed to show great interest in it,” he told TheJournal.ie.

Walsh says he and a friend purchased the 1980s-era caravan in 2013 to attend the Electric Picnic music festival. They were unable to resell the van for a good price.

“We did a bit more brainstorming with it and I suppose our love of Irish pubs made it a natural route,” he said.

“As we started work on it, we started to get a bit more serious – we realized this could turn into a business.”

Four months and nearly €20,000 later, the work was done and the caravan has become a serious business for the 40-year-old.

The caravan has since been part of several weddings, a christening, a 75th birthday party, and an IT firm’s Christmas party. Now Walsh is about to deliver one of his mobile pubs to Boston.

“Very early into this project, we realized that The Shebeen was going to be something very special,” Walsh told the Irish Examiner.

“We have already received an order to ship one of our designs to America,” he says. “It will be very similar to the original Shebeen, except it will have a thatched roof, meaning it will really encapsulate that feeling of Irish tradition.

“My main aim is to get six to eight of them built next year and get them overseas, to Britain, America, Europe and the likes. It’s a unique product so it should travel well.”