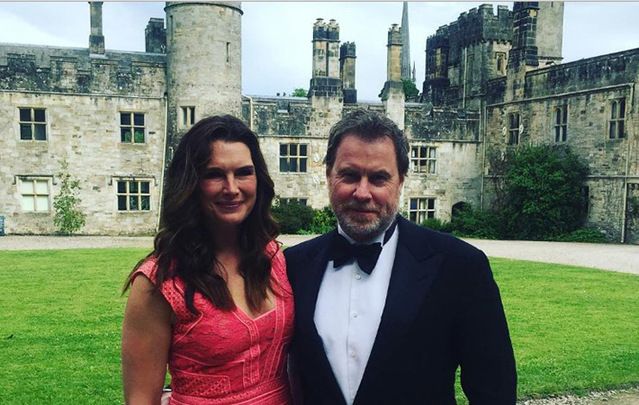 Brooke Shield’s Instagram photos are causing quite a stir with even Kelly Ripa drooling over her trip to Ireland. The star and her husband Chris Henchy spent time in the Emerald Isle and attended a wedding at the 12th century Lismore Castle, in County Waterford.

Shields and her screenwriter husband spend a few days around the wedding in Ireland. The high-end wedding took place on Saturday, June 11. Scrolling through the shots you can see why people are obsessed with wedding in an Irish castle.

On Instagram Shield’s posted “I can’t help myself but keep posting these memories,” alongside various photos (see below).

Lismore Castle is located in the town of Lismore, at the foot of the Knockmealdown Mountains, which border Tipperary and Waterford. . The site was originally occupied by an abbey in the 600s. Dating back to 1185 the present Gothic look of the castle was built and designed by William Cavendish, 6th Duke of Windsor in the 19th century. The Father of Modern Chemistry, Robert Boyle, was born here in 1627.

This isn’t the first Hollywood star to stay at the castle. Lismore served as the residence to Fred Astaire’s sister, Adele, who lived there with Lord Charles Cavendish until her death in 1981.The castle still serves as living quarters for the 12th Duke of Cavendish and his son but on June 11th it was filled with what looked like a fun wedding.

The fun included an ice-cream truck about which Shields wrote “One of the many final touches to the mesmerizing wedding. Chris pushed little kids out of the way to get in line!”

I can't help myself but keep posting these memories.

Whose wedding this was has not been divulged but man we’d have loved to have been there. It looks truly magical.

Have you been to a magical Irish wedding? Share you memories with us below.