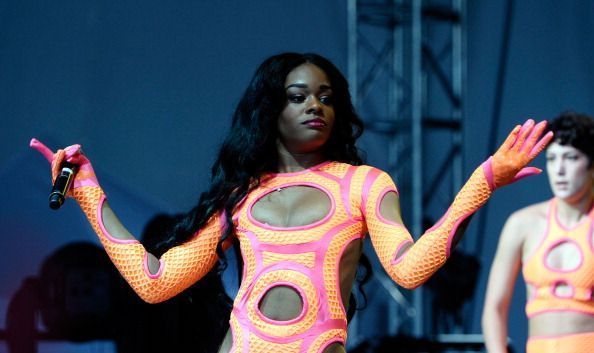 US star calls Irish women “Oompa Loompa looking spray tanned, crazy looking b*****s” and adds that she woke up “in the Irish spring …I got the pot of gold, b***h” ahead of sold-out Dublin gig.

The American singer-songwriter’s social media posts ahead of her Dublin gig on Tuesday (Jan 22) have gone viral after she “got off” her flight from London to Dublin and took to Instagram complaining about everything from airline staff to the fact that “Irish women are ugly”, dubbing herself the “queen of Ireland” who had a “pot of gold”.

In two separate Instagram videos the star, best known for tracks like “212” and “Anna Wintour”, ranted about her experience having been forced to get “off the plane” an Aer Lingus flight from London to Dublin.

Following her social media rants, the Irish airline released a statement saying they have a “strict no-tolerance policy towards disruptive guest behavior.”

The US star said she "had her bags deep in the plane" and a flight attendant was asking her questions.

She said "I was trying to find my passport and I didn't have the answers and she was staring at me. I said don't stare at me."

Banks explained that the cabin crew then spoke with the captain and more staff "crowded” around her, as she said, “like I'm some sort on animal".

She said she "got off the plane" and added, "I've worked too hard in my life to be cornered."

The 27-year-old star went on to say that “Irish women are ugly” and said she had been banned from flying with Aer Lingus.

The Aer Lingus statement on the matter read:

"Aer Lingus can confirm that two guests scheduled to fly on 10:55 GMT flight from London Gatwick to Dublin (EI233) this morning disembarked themselves prior to departure.

"The guests in question got off the plane safely of their own accord.

"Aer Lingus has a strict no-tolerance policy towards disruptive guest behavior. The safety and security of our guests and crew remains our first priority."

In the videos which shocked her fans she went on to slam Irish women and ask for support from the Irish UFC champ Conor McGregor.

"The girls have scurvy, they're like vitamin deficient. They need some calcium tablets and some Camaraderie soap. Anyways, I'm back on the Chardonel."

Read more: Are Irish women the hottest in the world?

She went on to share screenshots of a conversation with the MMA star Conor McGregor who she had texted “Conor help me they are bullying me” to.

“I'm going to make it to Dublin. Do not worry.”

As she made her say across the Irish Sea by ferry to Dublin her tirade continued.

She said “Aren't you happy to have such a Queen like me? Oh my God, the first black queen of Ireland.

This is the not the first time that Banks has been in hot water over her use of controversial language and posts on social media. In 2016 she publicly apologized for using racist and homophobic language in a rant directed at the former One Direction, band member Zayn Malik.

At the time she claimed Malik had copied some of her ideas and that his video for “Like I Would”. She claimed it looked like the one she made for her track “Yung Rapunxel”.

Her Twitter account was later suspended, and she was also dropped from the lineup of grime and hip-hop festival Born & Bred in Haggerston, east London.

What do you make of Banks' Instagram videos while in Ireland? Take and look and let us know what you think in the comments section below.