A masterful collaboration: Rhiannon Giddens and Dirk Powell at the Irish Arts Center

The Irish Arts Center stage is being readied for “Masters in Collaboration XII: Rhiannon Giddens Meets Dirk Powell,” from February 9-11. In their music, Americana meets Celtic influences for a mesmerizing sound. 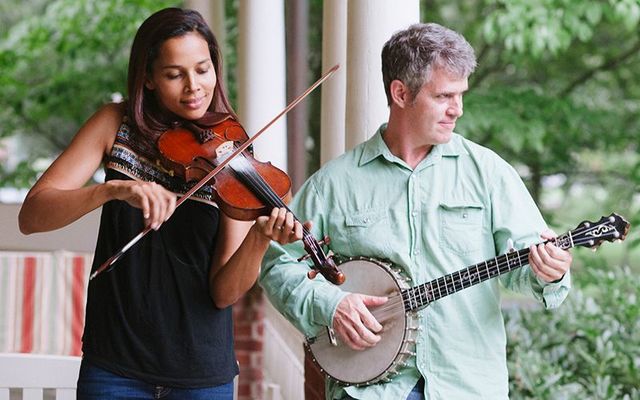 We have come to expect imaginative and creative entertainment from that modest three-floor former tenement garage space known as the Irish Arts Center in Hell’s Kitchen. It is reaching the end of its phenomenal fundraising campaign for a brand new edifice breaking ground just around the corner later this year.

The $60 million effort is as astounding as the amount of unique programming churned out by the over-reaching staff under the leadership of Aidan Connolly, its executive director and Pauline Turley, the vice chair.

One of their most innovative series at the IAC is the Masters in Collaboration program that debuted in 2007 when Paul Brady met a young Nashville singer songwriter named Sarah Siskind.  The concept pairs one artist with another over the course of a week’s exploration of their respective work with hopes of new material also coming forth.

That intense immersion at 553 West 51st Street culminating in weekend shows has more or less been successful over the decade.  Sometimes the impact isn’t always immediate, but the importance of creating a space for that conversation is paramount when crafting potential duos to take this opportunity.

So the next stage is being readied for “Masters in Collaboration XII: Rhiannon Giddens Meets Dirk Powell,” from February 9-11, and admittedly, neither may be well-known artists on any Irish trad fan’s consciousness. But they are major players in a broader Americana musical landscape that increasingly flows freely in both directions between Celtic strongholds like Ireland and Scotland and American roots communities throughout the Appalachian South and Midwest down to Louisiana.

America’s multicultural melting pot in these regions fused the music that kept native Africans in touch with their roots, European oral and music traditions brought from the old countries including the British Isles of England, Scotland and Ireland and the French Acadian influence of the Maritimes resettled in Louisiana.  Down through the centuries these divergent musics and cultures both stood their ground and evolved through the usual folk-oriented tradition bearing techniques and humble artists who personified their most authentic aspects and passed them down in their communities.

Out of that milieu come artists like Giddens and Powell who are truly 21st century folk artists secure in their roots and upholding tradition while ready, willing and able to move it forward in today’s modern era keeping it relevant.

Giddens, from Greensboro, North Carolina is a multi-talented singer, dancer, multi-instrumentalist, composer and actress who co-founded the Grammy-winning Carolina Chocolate Drops String Band.  Throughout her career she has mastered many forms that shape her African-American roots like gospel, jazz, blues and country and even rock and roll when she wants to be more contemporary.  Her marriage to an Irishman has fortified her grasp of Celtic crossover material that she would also have been exposed to over her multi-faceted career, allowing her to spend more time in Irish environs in recent years.

Her creativity and sensitivity to letting her art define and unite us influenced the panel who dole out the annual McArthur Genius Grants from the McArthur Foundation as she was one of the lucky recipients in 2017 of a $625,000 five-year grant with no strings attached.  One of the intentions is to allow the awardees, a freedom from everyday pressures to continue working at what they do and, in Giddens case, continue to development her own artistic pathway and influence.

Powell’s family roots are in Kentucky, but he has lived in the vibrant roots-oriented Louisiana communities that celebrate their Cajun, Creole and jazz heritage in myriad ways.  A gifted multi-instrumentalist and singer, he has worked with so many great artists over the years and currently plays in Joan Baez’s touring band as well as the highly regarded Transatlantic Sessions Ensemble whose raison d’etre is a celebration of Americana Music melding with Celtic music.

The one-week opportunity for Giddens and Powell provided by the Irish Arts Center affords them the opportunity to continue delving into some of the music and projects already underway for the two long-time friends, advancing them to another stage.

But more importantly, in my opinion, it grants them greater exposure among an Irish audience here in New York cultivated by the Irish Arts Center who share that dual interest in where our heritage has been and where it is going to.

In presenting virtuoso artists at the top of their game like Giddens and Powell at this time when we need to spend more time reflecting on who we are as a nation and where we are going culturally, this seems like the right collaboration for this time.  In fact, it is downright genius.