The four-piece family band The Maguires launch their first music video as they prepare for debut US tour. 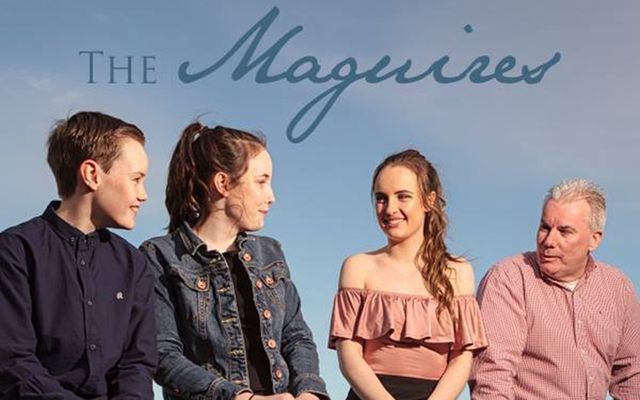 Earlier in 2017, IrishCentral featured the skills of incredible 11-year-old bodhrán player Seán Maguire who plays alongside his Dad and two sisters in The Maguires. The four-piece family band has now returned with their first music video to accompany debut album “Little Giants and Other Oxymorons” and we get to hear what the whole family can do!

Playing a set of reels called “Go Away Back”,  the band runs through the tunes Fergal O'Gara's, The Hunter's House, and Speed The Plough in style. Set in the Button Factory in Dublin, the video was filmed by Anthony White and we love how he captures the family’s obvious enjoyment as they play together.

Made up of Emma Maguire (fiddle, flute, concertina, piano), Aoife Maguire (concertina, uilleann pipes), Seán Maguire (bodhrán) and Philip Maguire (guitar), The Maguires have been on the go for two and a half years. They released their debut traditional album “Little Giants and Other Oxymorons” in December 2016, writing six of the eleven tracks featured.

And there’s great news for fans of The Maguires in America as they’ve now lined up some US shows for summer 2017. Appearing in Milford, Connecticut; North Haven, Connecticut; Summerville and Canton, Massachusetts; in Philadelphia, Pennsylvania; Butte, Montana; Milwaukee, Wisconsin; and in New York City, the band will take two months to tour around the US and, no doubt, wow old fans and win some new ones.

You can see the full gig listings below:

For any fans in Ireland, they will also feature on the Bill & Imelda Show on LiveIreland on Sunday, April 9, at 6 pm Irish time.

You can find out more about The Maguires on their website - http://maguireband.com/ - or on Facebook. Little Giants and Other Oxymorons is available on CD from our website (maguireband.com), or for download from iTunes, Google Play, and CD Baby.